To wrap up November 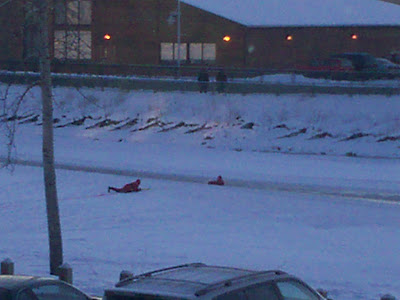 This is a picture taken looking out the window of my office. The fire department were practicing rescuing people out of the river. Coming from a sunny local, its depressing to say that this was taken @ 2 in the afternoon. We are truely into winter now. No more 40 degree heat waves of November.

Wrapping up November: I'm not comfortable going to coworkers houses for Thanksgiving. I feel like a foreign exchange student at a family gathering. I don't understand their traditions & am always over-dressed. So I opted to go to Endor for turkey day. They decided to celebrate the OTHER Indians & have a bollywood meal. This included all of the participants changing into Indian clothing. The food took a long time to cook so they had planned to spend that time in the sauna. I was all game until they didn't offer even a towel. I can't spend an hour naked in the heat with complete strangers, then sit down to a table for dinner & small talk.......hippies! So I opted to stay inside & stir the pots. After a wonderful dinner, we watched Bollywood! Definately not traditionally Indian, but any Bollywood movie can be made to a drinking game.

Rules for when to take a drink during Bollywood movies:
1) Whenever an actor does a monologue inwhich they talk about themselves in third person.
2) Whenever a midget is used in place of a child.
3) Anytime that you see nipple. Doesn't matter what sex, male or female.
4) Anytime there is a double pevic thrust, either forwards or backwards.
5) Intermission. All Bollywood movies are three hours long & they have do have an "interval."
6) Whenever an actor whistle talks.
7) Anytime you see a goat.
Last, but not least,
8) Anytime there is a Bollywood kiss. Kissing is prohibited to be shown on Indian cinema. They can show a man licking a woman's inner thigh but no lip-on-lip interaction. Bollywood kisses are generally a close look in the eyes while they breath on another or a choregraphed head bob during a dance sequence.

Note: If you do intend to hold a Bollywood party, remember that it is required to attempt to dance along during the choregraphed scenes. (That can be up to four a movie.) So if you can pet a dog with one hand, turn the lightbulb with the other while doing the Roger Rabbit you'll be fine.