Fall doesn't start in Fairbanks until the Tanana Valley Fair. With perfect timing, the day the fair opens it starts raining. It hasn't stopped for weeks. I asked when it would stop & cringed to the response. "It doesn't, it just turns into snow."

The fair was different. Everyone was excited about the rides & the food. There were gyros! $10 to get in to just for Greek food. Atleast I got in for free. I was helping out the Interior AIDS Assoc. by giving them bathroom breaks. One break a man came up to tell me how you cure AIDS by basic cow husbandry. Apparently a calf doesn't have an immune system without three weeks of saturation with milk. He believed you could rebuild immune systems in humans this way. The conversation ended when I got serenaded by the barber shop octet.

Before it started raining I went berry picking with two coworkers. It was disturbing when they called Itchy "bear bait." Bears love blueberries. Luckily they like them at a late ripeness then we do. That doesn't mean that you don't keep a wary eye out. The way to keep a good distance between you & bears is noise. Some people attach sleigh bells to their clothes. I personally think that's like a dinner bell. James likes to do Mr.T impressions while Mike sang. With those two carrying on we spent an afternoon on our bellys picking low-bush blueberries. Then we drove to Chattanika Lodge to eat a Dredge burger while basset hounds lay at your feet.

I have the title on the Vespa now! I got excited to see that there was a course titled "Intro. to Small Engines." In the class you got to dismantle a 2 stroke engine, remantle it then bring in your own project. Just what I needed! When I went to register they wouldn't let me because it is only taught to Hutchison high school students. I was able to register this week to a graduate level Arctic Engineering class without any background checks but I can't get into high school.

Finally fell down the stair ladder up to my bedroom. I miss you more than a hot pad.
Posted by Miss Victoria Regina at 10:56 AM
Email ThisBlogThis!Share to TwitterShare to FacebookShare to Pinterest 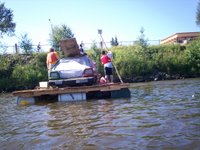 The summer has finally showed its head. It has been raining so much that it’s only risen over 54 degrees one week since May. The dear old plumber at work today told me about his troubles building his cabin in this weather. He told me that he built his tool shed first & was camping in a tent. It got so bad that he moved his table saw into the tent & moved into the shed.

It even down poured on the governor during the ground breaking ceremony at the airport on Wednesday. That's right, we have officially started construction. Just three more years & it will be finished!

This week has been so exciting for me. Wednesday morning I took my roommate's visiting family to a pancake feed in a parking lot down the street. I had my first sourdough pancake from 100 year old pancake mix. I never knew that sourdough is one of those things that you just keep adding flour too & it will last forever. Tasted pretty good.

That evening I went to the preliminary events of the World Eskimo International Olympics. There was the blanket toss, the one hand reach, the one leg kick, the stick pull, knuckle hop & ear pull. There are others but I really don't want to go to the seal skinning competition. There should never be an Olympic sport that sounds like a menu- "dependant on the seals of the season". Other than that one I was quite impressed by the competitions. The blanket toss is like it sounds that a bunch of spectators come out, they move a blanket made out of many seal skins, then someone gets thrown up & down on it. The catch is that they have to land straight up on their feet & does some dance move in the air. The 'blanket' did get holes in it twice during the competition. Historically this was done to see long distances over the tundra & for fun.

The one hand reach is like a push up except only one hand can be on the floor. The rest of the body has to balance on that hand while the other hand in reaching out to grab a dangling ball. This was original a training exercise to learn balance incase the ice breaks up around you.

The one leg kick is like the reach. They balance on one leg, jump in the air & kick a ball on a string & land standing up on that same leg. They can jump up to 8 ft! Why aren't there any Eskimos in the NFL? Anyway, this was a way of signaling far off ships when I whale was killed.

The stick pull was like tug-of-war except with a foot long stick covered in Crisco. It’s supposed to train you how to grab a fish in the water.

The knuckle hop & the ear pull are the pain endurance competitions. The knuckle hop is a push up on knuckles & they see how far they can hop. The knuckles do get bloody. It’s supposed to mimic a seal. The ear pull...well the world champion is an 800 lb. Eskimo named Big Bob.

I might go to Sunday’s competition to watch the Eskimo Women versus White Men tug-of-war.

Also this weekend is the Golden Days celebration. Its kind-of like a founders day celebration. The water activities are what I'm interested. I have bought my Rubber Duckie race ticket & come Saturday, they will release 6,000 rubber duckies into the Chena River. The duckie that arrives at the Welsey Bridge the first wins $10,000. On Sunday is the Red Green Regatta. I don't know if you have seen that show on PBS but it’s about this do-it-yourselfer who gets hurt more often then not by his creations. So you have to build a raft from found objects that somewhere on it uses duct tape to attach something. People have been telling me about rafts made with oil drums & swing sets & one year a man simply paddled down the river in his refrigerator.

So that's for the sunny days. On the rainy days, I have been searching for parts for my winter project. Only in Alaska can I go to a garage sale & find a 1958 Sears 125 Vespa Allstate Super Crusiaire! Not to mention that it’s been owned by the same family for four generations & has a title. I'm sure it needs some work but I won't know until I find a column lock key.
Posted by Miss Victoria Regina at 10:47 AM
Email ThisBlogThis!Share to TwitterShare to FacebookShare to Pinterest

I finally did it, I have my first blog. Since I moved to Alaska I have been sending weekly emails to all of my friends & family about my experiences up North. The emails got too large, crammed with images, so that no one could read them. So the ended up all garbled. A blog is the answer.
Posted by Miss Victoria Regina at 10:49 AM
Email ThisBlogThis!Share to TwitterShare to FacebookShare to Pinterest
Newer Posts Home
Subscribe to: Posts (Atom)