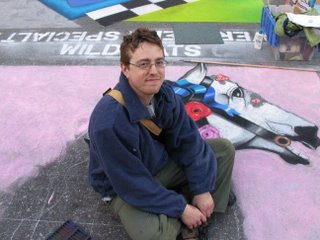 Its been over three weeks since I returned from Denver. After a week of starring at the wall, I unzipped my suitcase to unpack. So its not a shock that it took me so long to blog about what has happened lately.
Tuesday, November 14th I received a call from Wayne that morning. He had been calling Brandon all Sunday without any answers. Monday, he called his work & he hadn't showed up. He went over to his house & the garage was unlocked. The window was rolled down, the battery spent & Brandon was dead in the front seats. This is what he told me that morning sitting infront of my computer at work.
Can anyone ever truely explain what you felt at a moment like that?
Brandon was the brother that I never had. Our dogs & art brought us together several years ago. There hasn't been a week since then that I hadn't seen him or talked with him on the phone. He was my partner @ the gallery, street painting buddy, a fan club of two for manga porn/pink squirrel milkshakes/stop-motion photography & warehouse mate...a constant compainon.
I tried hidding under the blankets with Itchy but the phone never stopped ringing as one person after another discovered about his death. I couldn't deal with it on my own in the Arctic. I flew back to Denver for his memorial. Lauri Lynx Murphy was my hero Friday night as she hung his art, had a band, and slide show. It came the time to talk on a microphone to this crowd. I wanted to tell his family, girlfriend, friends & admirers all the things secert/personal that I only knew about him to share how wonderful he was but instead I only said how much he admirered everyone in that room, that he's never said a single bad thing about anyone.
We cleaned out his house. I won't go into the difficultites of this but it was a changing moment for me. I was shocked how anyone can find good moments during this but there were moments.
My sister was fantastic during this time. We took a Bollywood dance class for her birthday. She threw me a surprise birthday party (well not such a surprise but it was a good thing that someone spilt the beans or I wouldn't of gone). It was good to see the friends that were there for me.
Since I got back I've been working everyday & weekend on the airport. I had my Arctic Engineering final exam. A dance performances. A company Christmas party that I ate muktuk (rancid whale meat). The regular holiday doldrums. Time hasn't healed the hurt. Brandon was one of those friends that I was planning growing old with. You can't fill that loss just carry on with a gap.
Posted by Miss Victoria Regina at 4:18 PM
Email ThisBlogThis!Share to TwitterShare to FacebookShare to Pinterest
Newer Posts Older Posts Home
Subscribe to: Posts (Atom)