Does anyone get the Dead Kennedy's reference? We stopped singing it halfway through the 20 hour travel from Denver to Bangkok.Our first day in Bangkok was recovering from jet lag. The next day we walked through the flower market watching the shop keepers fold flowers to make them look like lotus for temple offerings. Then we went to our first temple to walk the Wat Pho and the reclining buddha.The only buddha in a temple you are allowed to take a picture of. Around temples they have sun umbrellas that say Buddha is not tattoo. Buddha is not furniture. Buddha is respect. 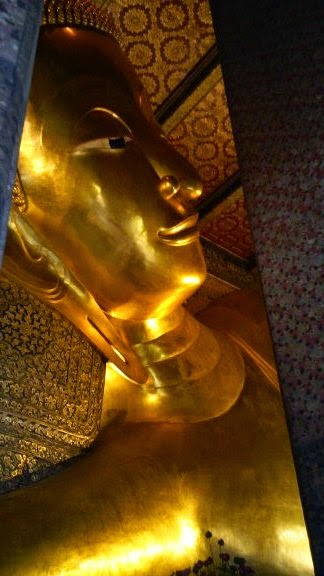 That evening we went to the Asiatique Riverfront to go for a dinner dance show.
Its not desirable to wake early on your honeymoon but there's two things that you need to beat in Thailand: 1) the heat, 2) the Chinese. No kidding, the next day we went to the Grand Palace to see the Emerald Buddha & it was packed.  That night we walked the red light district near the hotel, ate street food, bought gifts then took a stroll. What was supposed to be just a stroll around the park was a five hour walk around a royal park that we couldn't enter. We did get to see street bands, one were a couple of elementary schoolers playing The Cranberries. The saddest part of Bangkok is the 200,000 stray dogs. 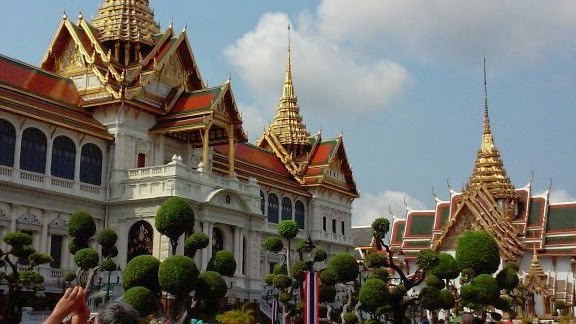 We then started north, first stopping at Summer Palace then towards Ayutthaya. One of the ancient cities, Chai Wattanaram Temple that was lost in a battle against the Burmese. 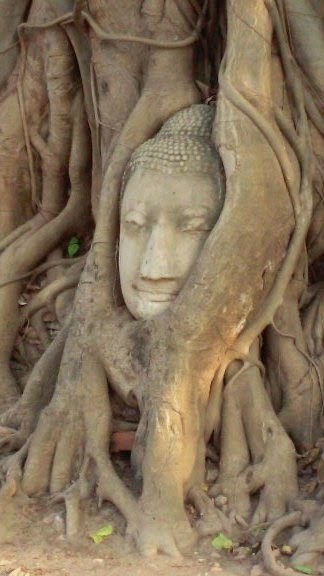 Further north the higher we get in the hills. A more complete set of ruins were in Sukhothai.You can notice the difference in stupas. The pointed stupas are Thai, bulbous stupa or chebi are copies of the Cambodians. 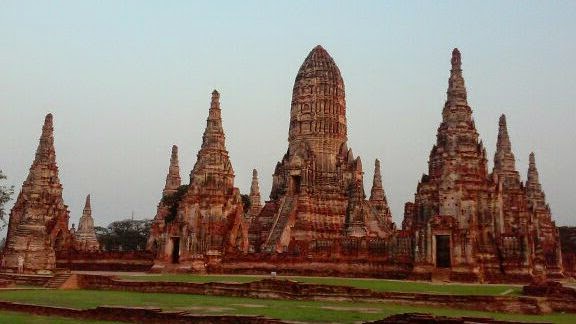 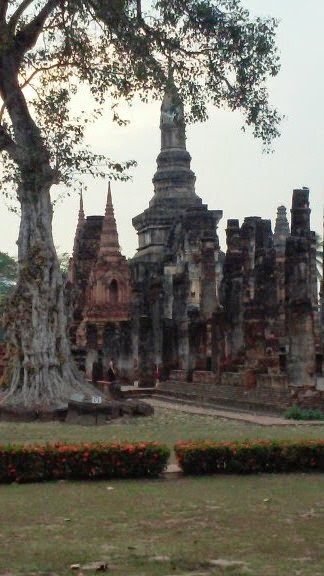 Our hotel in Sukhothai was beautiful. Cooking outside & were blessed by monks in the morning we gave them offers prepared in the kitchen.  The evening was hot hot hot so we jumped on a tuk-tuk with a friend & drove to new city for a drink at Bar 3300 right in the middle of an intersection. Its a buddhist conspiracy to make weak drinks. Spent the trip asking for one more shot. It took four waitresses & one bartender for me to explain that sour mix is not a cocktail, that you have to add alcohol to it. 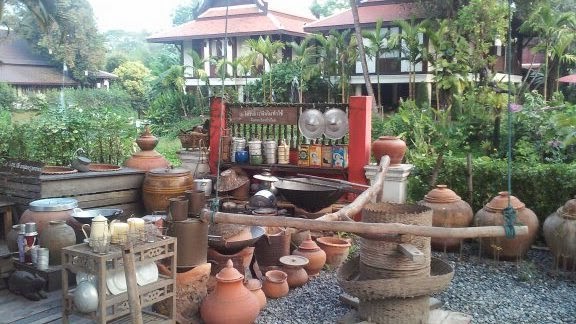 On the road north we would stop in towns that everyone specialized in one trade.We bought some beautiful woven scarves in one town.  In another we walked down a side road where a granny had an indigo workshop. She showed us how indigo is made & then put us to work over a burner with wax. We took little metal stamps, dipped them in the wax then pressed them on the cloth. Then she soaked them three times in the dye. Below is a picture of the cloth after the first dip. She gave us little pieces of scraps that Nic & I practiced on. 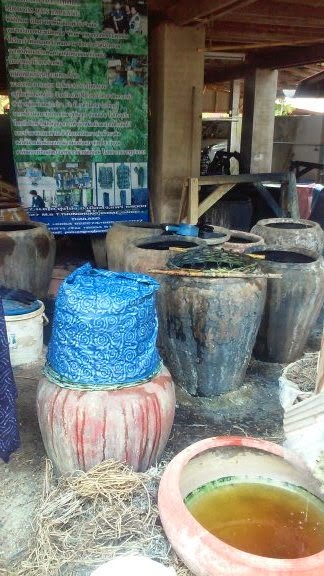 Further down the road we made a side trip to yet another temple on a suggestion from another traveler. Most american boys go to summer camp, most Thai boys go to a buddhist temple. One of those boys grew up became a famous artist, went to his home town & created this marvel. My best description would be a temple designed in anime. You progressed down from hell with characters like the Predator & Hellboy in the details up to heaven where Neo from the Matrix was near Buddha. Amazing. 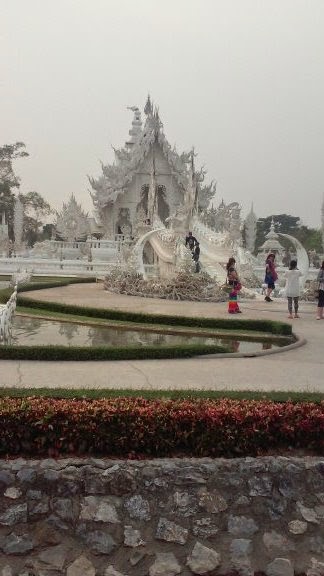 Near the Myanmar board, we decided to not to go over to ride around on rickshaws but decided to hike up 306 steps of the Naga staircase to over look the Golden Triangle. 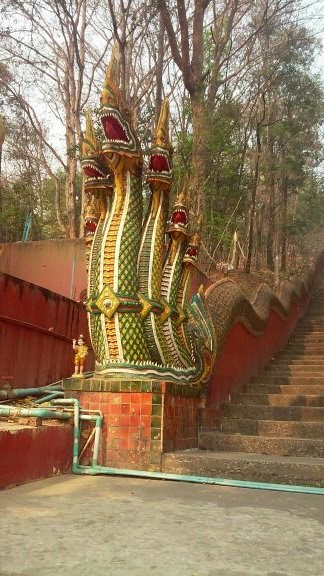 Lunch was a restaurant in the hills at an artists house. To get up the mountain we took what we fondly called the farm taxi. Basic sustainablity- the engine comes out to go in the tractor, the irrigation pump, etc. 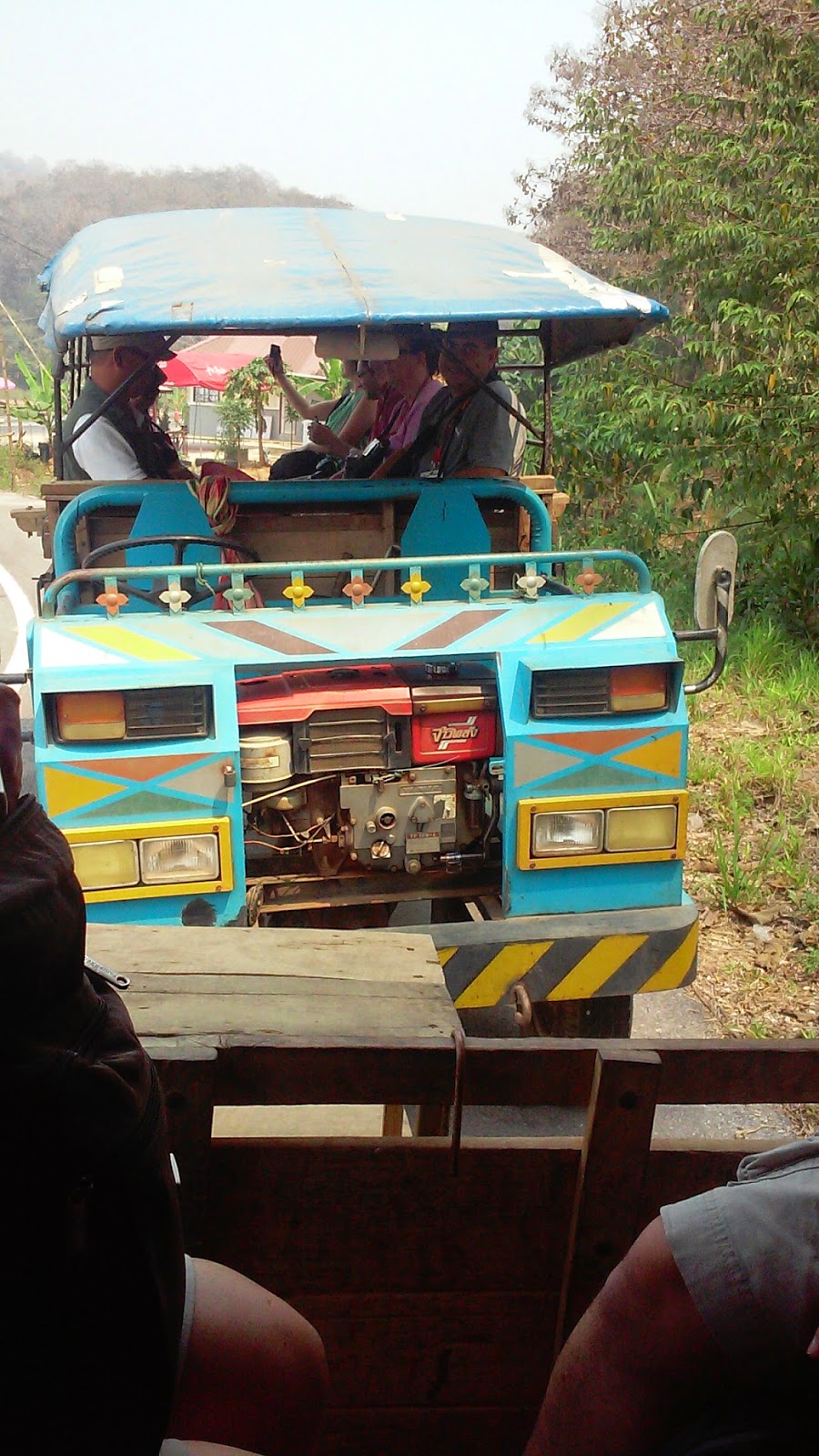 After lunch we took a river boat over to Laos for cocktails. The picture below are of tiger testicle spirits & cobra spirits. Not bad. Much smoother than the rice spirits. 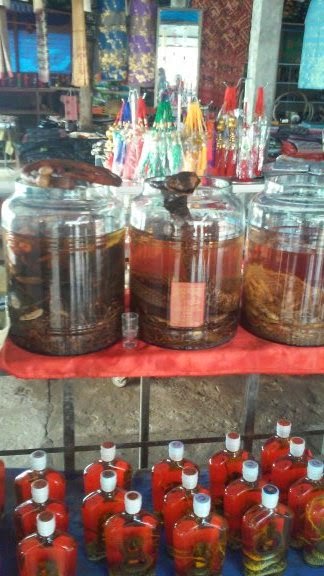 After a couple of drinks we were told that the villagers had captured a bear walking through. So I had to see it. Such a little girl napping in the shade & eatting watermelon. 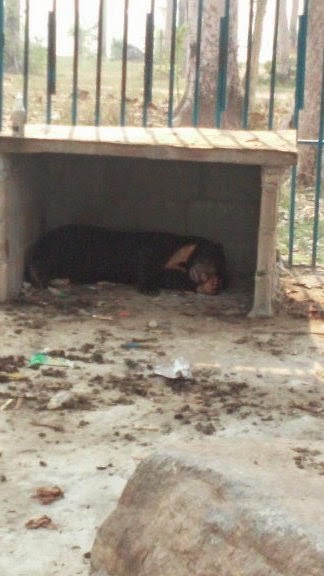 The next day we wanted to know who Long Neck Karen was. So we took another farm taxi to a hill tribe that we refugees from Myanmar. Nicolas started calling me Doctor Doolittle because dogs were getting off their ropes & following me around the village. 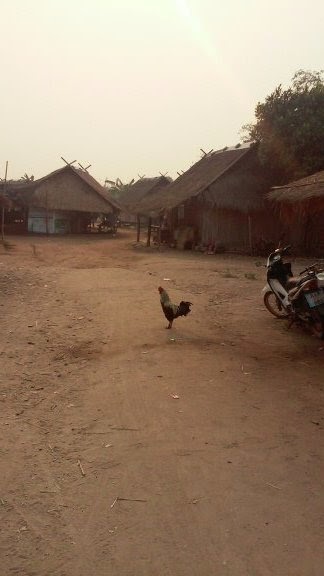 Only grannies & babies in town while the men worked in the rice fields (lana). Yes, this grannies teeth are black from years of eatting betel nut, a narcodic. 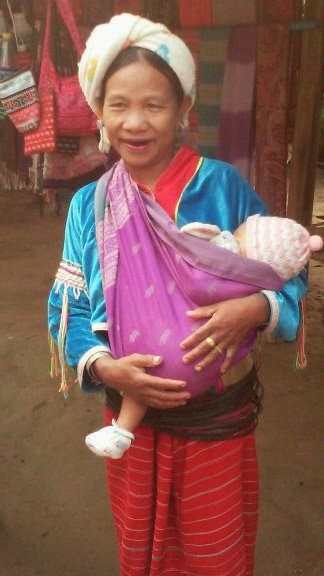 Walking back to the hotel I took tons of pictures of the homes. Its amazing how 70% of the countries overseas still incorporate weaving into their structures. This is a bridge we walked over woven with bamboo. 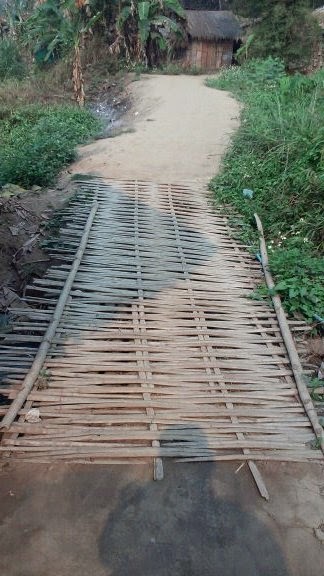 That evening we made it to Chang Mai where, besides the heavy smog, was much more fun than Bangkok. Our new friend took us on the back of a tuk-tuk to get moo-kata. A bbq joint the size of an aircraft hanger filled with raw seafood, meat & vegetables that you put in a tray than cook over a burner with coals & lard. Sorry the picture is shaky, lots of Chang beer that night. 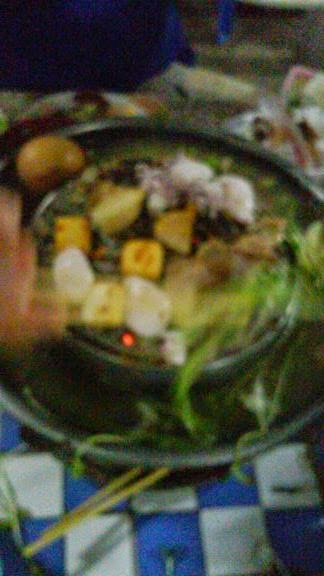 Our tuk-tuk driver that night was named Mr. Insuane (Mr. Insane). He had me sit on his armrest & hang out to make horn sounds with my mouth. I never mastered the Thai police sirens. He dropped us off at one of the famous night markets. Our tired feet deserved a treatment but I didn't want a Thai massage by the ladies yelling MASSAGE in my ears. We went for a fish spa instead that had fish eat the dead flesh off your legs & feet. Nicolas made the mistake of sharing a tank with me.  He got a dozen fish while I was swarmed by THOUSANDS! Incredibly ticklish when the go between your toes. Twenty minutes later though my legs were as soft as a baby's bum. 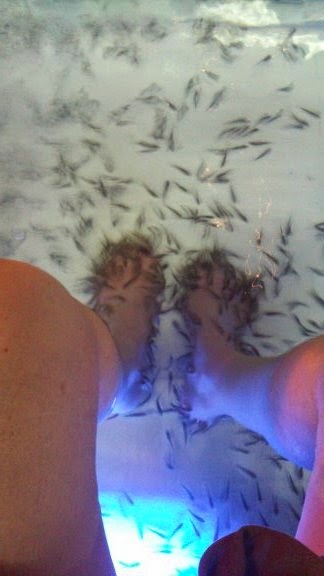 I could barely sleep that night because the next day we went to ride ELEPHANTS! Here's a picture of Nicolas tranversing the jungle on his asian elephant. I wanted my own. Afterwards an elephant took the hat off my head then gave me a sloppy, banana smelling kiss. Ironically it then went down to the river to take a bath & spray water on us. 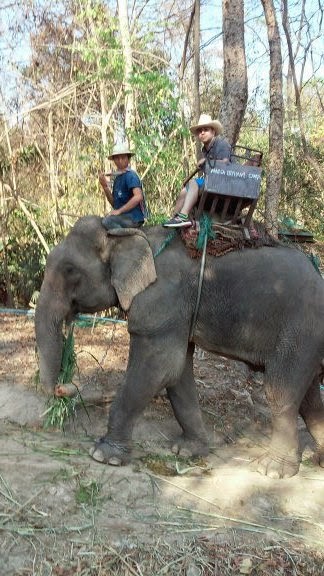 I could write pages about how nice the Thais were but they have a saying that sums it up- Land of Many Smiles. Our last night in a thai honeymoon suite with a bride & groom swan arrangement. 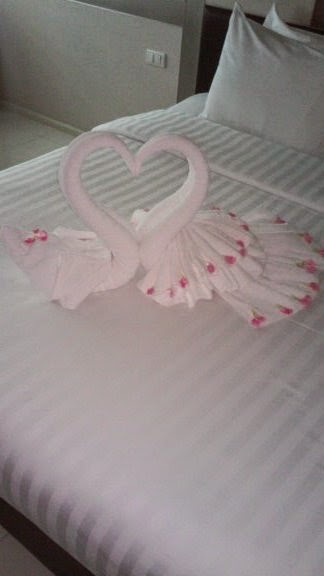