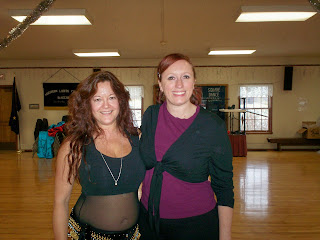 The brilliant Saqra came to teach six days of bellydance. I was able to make four & I learned so much. My first night was learning a gypsy tamborine dance. I pre-ordered a traditional tamborine from Saqra. I was mildly disturbed when I was given my tamborine because it still had some hair on the stretched drum head. Apparently it came from a red-headed goat with freckles...I was playing me- as a goat.
In a half hour, a group of professional dancers can degrade to a room of school children with tamborines. First you start acting like Cher from the '60s, than you start playing the tamborine on you back-side, then on other peoples back-sides...by the end of the class & was getting a back massage from edge of someone elses tamborine.
I was nervous about dancing for four days straight because I exploded a blood vessel two weeks ago doing none other than yes, break dancing. (No snide comments about 'break' dancing, I heard them all from my co-workers). After four hours of shimmys I didn't feel anything the rest of the time.
During this time, I was puppy sitting my coworker's 14 week old Husky. This reminded me that I don't want to have another puppy. She was terrified of me but adored Itchy. Image the cool teenager on the block & then the little kid that idolizes her. That was the situation, Itchy was followed everywhere, whatever she did, the puppy did. Ate a rug though, Itchy did not.
It was also booty shopping time on Monday. It started snowing on Friday so Itchy needed some new sneaks. I went to the pet shop & bought the XXSmall pair. Went home to put them on & they didn't fit!! How is that possible?! The only animal that has smaller feet than Itchy is a ferret!
Miss you more than eye candy cosmetics,
Victoria
Posted by Miss Victoria Regina at 7:42 PM
Email ThisBlogThis!Share to TwitterShare to FacebookShare to Pinterest

My sister came to visit for 10 days....I think & she got the full Alaskan experience. Eating crab, salmon, reindeer & musk ox. Going to the bathroom outdoors. Meeting bears. Watching Killer Whales jump. Camping out on the beach. Berry & rosehip picking. Flying on a cargo plane. She got to do it all.

I even got to experience something new. We were going to Seward to see the glaciers & she set up the reservations on the boat. I had convinced her that it was better to go on a small ship than a 150+ person tour ship. The morning we are of to our tour we have to meet our boat on a shore behind a restaurant. That gave me a bit of concern since there wasn't any docks. But as the clock turned 8am here comes the boat pulling up on the shore & lowering a hydrolic draw bridge...Antoinette had booked us on a water taxi, so instead of taking a site seeing tour, we were going to be dropped off at remote bays around the glacier. Reg our Captain would take us anywhere that we wanted to go. For the majority of the trip there was us, Reg and a photographer. Antoinette & I had no agenda so we just went around to where ever the photographer wanted to go. He wanted to photograph bears. So we spent the day running up the gravel shores like we were storming Normandy get photographs of bears.....and once the shock value of that ran out, finding rocks that look like sushi.

I could go on for pages of what a good time I had but instead I'll leave you with this picture. 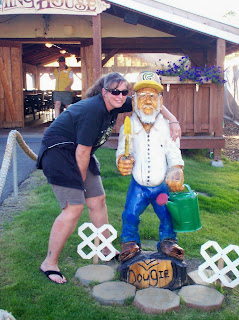 Miss you more than drinking hot coco made from a spicket out the back of a school bus,