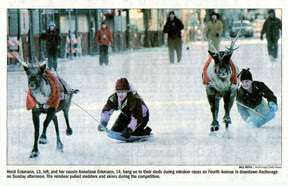 Its March, spring is in the air, time for Winter Carnivals. If you want to experience some arctic fun then March is the time of year to come. The Fur Rondy is in Anchorage, Winter Carnival/Dog Days/International Ice Carving Festival in Fairbanks, the Iditarod, & the Nenana Ice Classic. I was at the later last weekend to bellydance. The Ice Classic is also called the Tripod Festival because they put this large tripod on the iced Tanana River. Then they run a line to a clock on the shore. When break-up happens, the tripod falls into the river, snaps the line & stops the clock. You buy tickets that have a date & time that you think the tripod will fall in. Whoever guesses the closest gets the kitty. I think that its been a warm winter, so I'm guessing April 27th.

The Tundra Caravan was hired to dance at the indoor part of the festival. So we drove down to Nenana for two shows. The first time we preformed after the "Crusty Carthart Competetion". Yuck!! After that we went to lunch. There's two restaurants in Nenana, the Rosewood Cafe & The Two-Choice Cafe.....if you're interested the two choices are pizza or hot dogs.

Here's a picture of Jessica, Liz & myself outside the hall. Its -28 degrees with a -61 degree windchill. Christ that's cold! 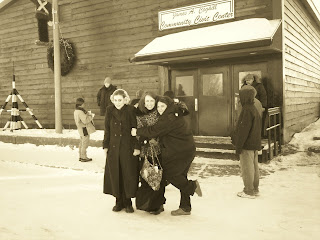 I took some amusing pictures of Nenana. They have a district court there....which is also the hair salon. Here's a picture of the snow cat repair shop/woodshop. 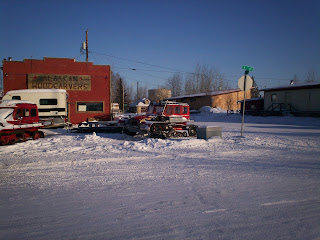 Update on the Vespa: Now that I don't have to spend every waking moment in the office, I have some time to work on the scooty. So I popped into the Alaska Fun Center for some gear oil. They sell snowmobies, atvs & such so I thought it might be a good chance. They didn't have non-detergent oil. Oh well- but then the clerk asked if there was anything else that I was looking for. Jokingly I asked if they had any Vespa parts. The guy went into the back & brought out two boxes of Vespa parts! They used to be a Vespa dealer 40 years ago. They stocked parts until the last owner left town. The two boxes were the last of the dealership....they sold to me for $20!

Miss you more than runaway Blitzen,
V
Posted by Miss Victoria Regina at 6:27 PM
Email ThisBlogThis!Share to TwitterShare to FacebookShare to Pinterest

Its been a while since I last wrote. Mainly because I've been working between 14-21 hour days, everyday, for the last month. But, as of today, I'm done designing the body of the airport. Fourteen months of pure labor have been lifted off of my shoulders. Now I can work on the fun stuff like the sandbox in the airport. Last Spring they sent me to a couple of elementary schools to talk to children about what they thought the airport of the future would look like. Some of their ideas were brilliant like hover-craft suitcases. What they kept on mentioning was how important the dinosaur sandbox was in the greeter lobby. So I pitched an idea, the shareholders liked it & now I'm designing a playbox out of glass. That's the kind of things that I have to look forward to....all the ideas that I pulled out that I thought no one would let me do & now I have to figure out how the hell to do it:)

While I'm sitting at my drafting table for hours upon hours, I have a couple of distractions. One is the Origami-A-Day calendar. Each day or two has folding instructions & the backs of the sheets are coloured so you can use the sheet from the day before to fold with. The instructions for Presidents' Day used a dollar bill. Then came Fat Tuesday that was a half instruction that ended on Ash Wednesday. This was what I completed for Ash Wednesday- 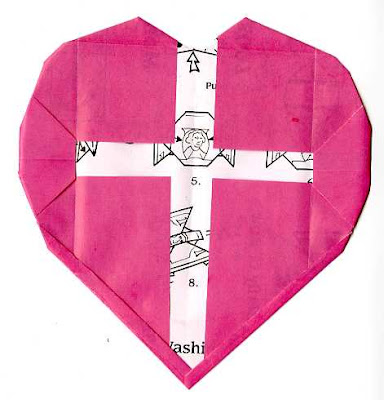 Do you think that the creators of this calendar are making a statement about money & god?

This reminds me of my Yeats? He had an ongoing discussion about a unknown island in the South Pacific with a colleague. He had the 25th edition of an encyclopedia that reported about this island. His colleague's encyclopedia never reported such an island. So they went their seperate ways, periodically searching for evidence. In the end they discovered that the editor that year of the 25th edition of that encyclopedia was an athesist. He believed by adding one page in an encyclopedia of a fictional land was proving that anyone can play creator & disproving the existance of god.

So I still haven't slept....just wanted to share with you that status of my mind after 24 hours without sleep.

Miss you more than reading between the lines,
V
Posted by Miss Victoria Regina at 1:48 PM
Email ThisBlogThis!Share to TwitterShare to FacebookShare to Pinterest
Newer Posts Older Posts Home
Subscribe to: Posts (Atom)