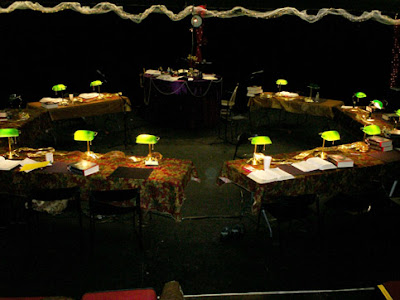 I almost didn't go to the Bard-a-thon this Sunday after I received a $170 parking ticket on Friday. Our office has been encouraging us to frequent the downtown retail, so I went to try out the 2nd Street Station for lunch. They only had three parking spots for this little place so I parked next to it, went inside BECAUSE IT WAS OPEN only to be told that they weren't serving food because the cook was sick. This is a restaurant so I didn't quite understand why anyone was there but there were a couple of tables of people drinking coffee & water. I walked out bewildered 5 minutes later to 2 parking tickets. One, a ticket for parking in someone elses lot (it wasn't a public lot) another because my season pass has expired. Apparently you don't have to do any registration or legal work on you cars in the summer up here but come November you have to get that taken care of. There was also a sticker on the tickets that said I had to pay the tickets in 5 days or the fines double! No chance for contesting in that little time.

I did go to the Bard-a-thon all the same. It was located in the Empress Theatre which is on 2nd Street up a flight of stairs. There were the tables all in a circle with the lights & the editions of Shakespeare. We read the Winter's Tale which said that it was a romance. In the first act the king was jealous of the queen's nice comments about the king of Bohemia so he thinks her unborn child is his & throws her in prison & askes his servant to kill the King of Bohemia. I had to stay around for Act II to see how this turns into a romance.

There weren't any men except a guy from New York that called in, so I ended up being the King of Bohemia. I told my coworker that he should of brought his teenage boys because there were a lot of teenage girls. Which brings up another debate that my friend Juliet & I are having....I believe that you cannot meet men any place that doesn't involve alcohol & she believes otherwise. So the Bard-a-thon is another point on myside of NON-hook-up joints. I brought this up with some local ladies. I put out the point that a Shakespeare reading has never been an occasion to meet men BUT where in Alaska do you meet guys socially? It is crawling with them! So they said that you have to get involved in what local men like to do......WHICH IS: hunting, fishing, skiing, snowmobiling & camping. (This came out of their mouths.) My question is then-- How does one female approach a man hunting in the forest? Because my mother never taught me how.

Anyway, I got a crown put in, my first. It was weird, the dental hygienist did get my lip stuck in the suction tube & sprayed powder adhesive across my face. The office was in a log cabin but like all dentists' offices it still looked like it was designed by Mr. Brady in the inside & hadn't been renovated since the '70s.

Miss you more than chewing gum,
V
Posted by Miss Victoria Regina at 7:55 PM
Email ThisBlogThis!Share to TwitterShare to FacebookShare to Pinterest

The Week of January 20th 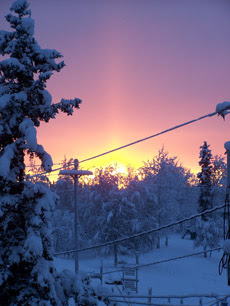 The sun returned to Barrow on Tuesday. They haven't had sun since November & now have one hour of sunlight a day. This made me think about the sun that lightly skips across the horizon at my office. This is a picture of the sun at 11 am out my office window & in my office. My office is up on the mezzanine so I have this view. 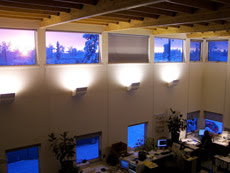 I know that his sounds gay but I just had my year review & I didn't get fired or get laid off. So I'm skipping across lilly pads right now.

I'm going to try to take some time out of the office this weekend. I might not even go in! Instead I think I'm going to try out the Bard-a-thon. Its put on by the Fairbanks Shakespeare Theater @ Empress Theatre. The Bard-a-thon has been running from last Saturday to this Sunday--24 hours a day. That's about four plays a day.

You might be saying, wow, I didn't know there were that many Shakespearing actors in Alaska...well, there aren't. Whoever shows up gets a part & you act it without ever practicing or in my case, reading the play. I'm going to drop in at noon on Sunday for A Winter's Tale because they will be serving free hot chocolate:) If you want to join me you can call in& do a part via the phone. The number is 907-457-4511 or if you just want to listen, its going to be streamed @ http:/sc5.spacialnet.com:18086/listen.plo.

Next week: My first trip to an Alaskan dentist. My accountant brought back macadamia nuts from Hawaii & I cracked a tooth.

Posted by Miss Victoria Regina at 7:34 PM
Email ThisBlogThis!Share to TwitterShare to FacebookShare to Pinterest

I have to give a moment of silence for the passing of Momofuko Anno. The man invented Ramen noodles, & yes, they are carb packed, but his invention has kept poor, grad. students alive for many years. Most folks don't know there are recipes for ramen but check them out http://mattfischer.com/ramen/?cat=2. For those times that I lived off Ramen & peanut butter, this moment is for you.

Other things that I love from Japan are their magazines. Japanese magazines for an artist are like run-proof pantihose for women- they have everything, their perfect! It doesn't matter that I can't read Japanese because they have the main titles in English & little signs that help you decipher. What its about is the images & the thousand ideas that you can get from them. My favorite store to go shopping for them are at the Kinokuniya Bookstore in Seattle. Itchy & I were pulling off the highway to go to Pike's Place Market for a savory crepe & there it was. I like to grab a boba tea, buy manga half-tone sheets, look at the male hair style magazines then off to the craft magazines. These are a hot commodity & you should snatch them up whenever you see them because they've tapped into something. I like the ones with dolls. Last time I was there I picked up Beans. 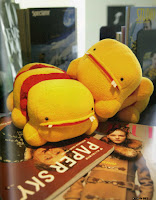 Glad that I did because when I was hanging out with my friends they all had stuffed dolls. One girl bought a doll of a pork chop with eyes for $75! It must be catching on in the US because when I was in Barnes & Noble last week I saw a book called Plush-O-Rama: Curious Creatures for Immature Adults by Linda Kopp. It had some cute dolls with patterns. I giggled over the half eaten gingerbread dolls.

What I really go ga-ga over are Japanese fashion magazines. I completely rethought the way I designed paperdoll costumes after I picked up FRUITS. FRUITS is a magazine that this photographer started after he daily took pictures of the freaky hipsters that used to hang outside his office in the haruka district in Japan. I bugged my local library for a subscription because a copy only cost $2.45 in Japan. The subscription cost them $200 for a year.....I said thank you. BUT my favorite magazine is Gothic & Lolita Bible. Oh, I'm seriously deranged about this magazine. Not only is it run by a transvestite (Mana)that does a four page modeling in every issue, not only does it have recipes, not only does it have the latest clothing from the designers & maps to their stores, not only do they include a poster/button/patch/stickers/iron-on transfer in every issue, BUT the designers give you a design in every issue WITH THE PATTERN! 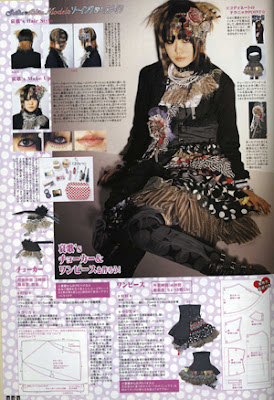 It will show how to do your nails & how to style a wig & do your makeup. How awesome is that!To tell you how I'm inspired by this magazine, I looked at one of the posters of a ram human, came up with a the design, taught a class & got an article written in it in the Lifestyle section of the newspaper.
This is one of those glad to be in Alaska days. So yeah, its -45 degrees out there today, but the new shipment of Japanese magazines came in yesterday. I couldn't get those in Denver, my sister had to get them on her travels or I once left work early & stood in a line outside the Ramada behind a Cosplayer dressed like Pokemon to buy them at a NanDushiCon (like a Star Trek Convention but for japanese animation).

Respect the Japanese inventions but remember never get interested in J-Rock because the cds are $40 a pop & never eat the shrimp flavored Ramen..its wrong.

I'm going home to try to design a stainglass headband like this girl has:), V
Posted by Miss Victoria Regina at 8:07 PM
Email ThisBlogThis!Share to TwitterShare to FacebookShare to Pinterest 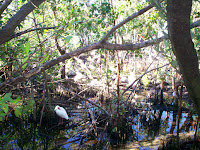 The holidays can be a very busy time of the year, even in a little town like Fairbanks. It didn't go below -20 degrees the entire month of December so people were out doing their shopping all over town.
Internet plays a big role in the holidays here but not as much as crafts do. It might be a hold over from the pre-computer/paved roads era or just an inner fiber of Fairbankans but everyone owns hand-made local goods. The best place to shop here is the Ornamentary for those things. Its a special place because its only open two times a year. Christmas & Easter. I went there to see what I can see & there were the goods that I saw in everyone elses house. I thought my mother would love the quilted, halibut pot holders but the lady in line infront of me got the last two.
Another big event is the Winter Solstice. Back in Denver, my friend Juliet & I would try to go to Red Rocks Amphlitheatre every year to watch the sun come up. I say try because most years it was a phonecall around 6am telling each other that one of us wasn't getting out of bed. This year I just looked out my window at the office around 11:25am to watch the sunrise. That's right, & sunset is around 3:30pm. [SIDE NOTE: I felt like a rock star yesterday. I slept in til 1pm, woke up, finished a movie & then made breakfast. I hope you can comprehend how cool I felt having breakfast at sunset. Rockstar!] Anyhow, winter solstice in Fairbanks is when we have fireworks, people exchange gifts & the local custom of launching FLBs. FLBs are Flying Laundry Bags. At the party, people go out side & launch laundry bags over wooden cages with candles inside & they fly off!
I ended up spending my holidays with my parents down in Florida. They helped me get some supplies. So I'm set on bellydancing costumes & grits for the rest of the year. We went to the beach & asian food. Plus we went to the Dry Tortugas on a catamaran. Wonderful masonry fort, warm sun & my first time snorkeling. Snorkeling is not easy if you are not a natural mouth breather. The ride back to Key West was hilarious. We had 10 ft swells so half of the people were puking off the back of the boat. Schmitz's have strong stomachs so when we arrived back in Key West we went to have Key Lime Margaritas & Dolphin Enchilatas.
Miss you more than saying I ate conch, V 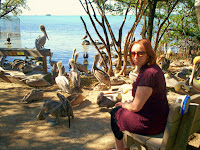