All that I have learned...

could fill a library (if I could recall it all).  Though as the old adage goes, the more I learn the less I know.  I continue try to fill in the gaps. Sometimes feeling like old Sisyphus constantly pushing that rock up the hill.  To try to stay in tune, up-to-date & relevant just so I can move forward with my life.  A year ago we had a household discussion that if I was going to be truly independent I needed to get more experience in construction management. I wanted to simply get a low-level job with a general contractor & work my way up. Unfortunately with all my years of experience in architecture & engineering, my job search was more like job wishing. I needed some connections with a foot in the door, so I went back to school.  I definitely didn't need another degree though I could of easily transferred my university credits & received an associate degree. I decided on a certificate that I could achieve in two semesters, though the speed shocked the college, I reached my goal.  As of this December I received a Certificate of Architectural Contracts & Materials from Arapahoe Community College.  I'm interning with a General Contractor, which is a little slow paced for me but I'm trying not to complain & learn from what tasks they put on my desk. On the side, I'm contracting with a surveying firm.  More books in my library of learning so to speak.

The real excitement is what I can now do that I'm out of night school. I am now a thrall with the Fjellborg Vikings. I met the leader Lodin at a European festival when we struck up a conversation about medieval carpentry & long houses.  The Fjellborg are not an SCA group but a historical reenactment group true to Viking history from the time of Danelaw in England circa 1000.  I am now apprenticing with Lodin to learn medieval carpentry.  His house has a full carpentry shop, sewing shop, brewing vault, museum & a blacksmithing shed out back.  I had some serious things that I wanted to learn but I have to start from the beginning with him.  Which the beginning means bone carving- a VERY smelly craft. I walk around a medieval workshop looking like X-Files with face mask so I don't inhale any of the bone dust.

This past Saturday we had Tom in town coming from Grand Junction visiting his son. Therefore we had a Bronze making workshop.  Tom knows a lot about PMC (precious metal clay) & brought every tool he owns for us to use.  One stipulation would be that we needed to make something the size of a silver dollar because he didn't bring his kiln with him.  It was a lot of fun just chatting around the work table making amulets & drinking horn tips. Edvin had brought a bottle of his home brewed spiced mead that we sipped while working. 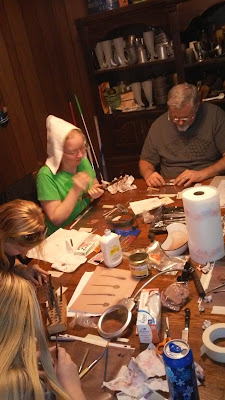 The PMC requires a lot of re moistening because it forms cracks while you work.  That leads to placing it on a hot plate to dry so that you can fire it.  Tom brought map gas torches so that amulets could get fired, filed & polished that day.  Here is what a good firing looks like. 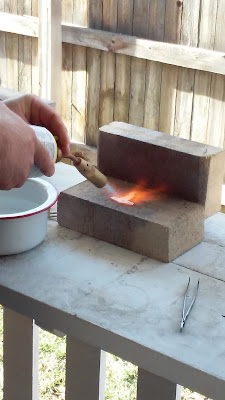 Not every ones came out in one solid piece so when I decided to go big & make a cloak pin, Tom took it back over the mountains to fire in his kiln.  Fingers crossed.

Tonight I go to round two of 3D Printing using SketchUp.  A free class offered at the Denver Public Library. Our tax dollars pay for two 3D printers at the iDealLab in the Central Library.  You can print however much that you want just as long as its using SketchUp.  The main printer uses open source so hence working in SketchUp.  I'm going because I want to see if I can make hat blocks using 3D printing.  An ancient trade using modern technology. Fascinating to myself & the techs that are assisting me.
Posted by Miss Victoria Regina at 11:25 AM
Email ThisBlogThis!Share to TwitterShare to FacebookShare to Pinterest

As a child you had one stupendous day for your birthday.  As an adult it seems to last two weeks, simply because it is hard to celebrate all with your friends on the same day.  My trophy husband turned 35 this past week & his birthday lasted 3 days.

First we went to dinner with his parents & then to see Quentin Tarintino's new film The Hateful 8.  I have been eagerly awaiting to see it because my friend was out of town in Telluride for 6 months working on it.  I couldn't make it to his gold showing so it was an opportunity to see it with family at least.  It was a great film. We got strange stares from the rest of the audience when his name came on the screen & we cheered. Not the regular routine for a Tuesday movie night  in a suburban theater.

The second day of celebrating was supposed to be a big affair but it was ruined by the US Postal Service.  How long does it take to get a card to someone in your own city these days? Apparently a week is not enough time.  I have been dutifully reducing my belongings as part of my new year's resolution so I decided to send out all of my 3D invites for his birthday gathering. I started to worry when I hadn't received a single RSVP by Monday.  So Nicolas started calling everyone & found out only one had actually received the card on Tuesday.  We did continue on & did have some friends turn up to Comrades Brewing Company for Geeks who Drink trivia night. Nicolas does love a themed party so we ran with the geek theme & decided Soviet scientist.  Through the years I've accumulated Soviet uniforms for every season...& I don't truly know why.  We did have outfits to wear. The staff loved it but the rest of the kids at the bar didn't get it. Alas most of them were born after the Cold War & didn't grasp the true AWESOMENESS of the my Iron Curtain chique.

I quickly made laboratory treats when I got home from work.  If you haven't checked out online cooking shows, do this one: Nerdy Nummies.  Rosanna Pansino does little Marthaesque cooking lessons but with eminent scientists cooking alongside her.  My oven has been out of commission for awhile now so we decided to just top Valentine's Day cupcakes with shaped Starbursts and strawberry jelly to make RED BLOOD CELL CUPCAKES. 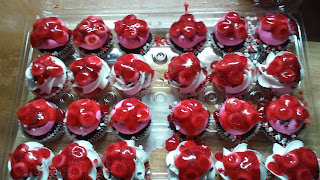 Then we decided to get super dorky & make geeky jello shots.  I had unused petri dishes (don't ask), the only other thing I needed was 'jello', vodka & gummies to make PETRI DISH JELLO SHOTS. 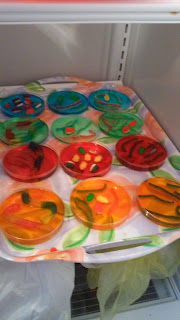 My disappointment came when we played Geeks who Drink.  I was expecting to awe them with my awesome bank of useless knowledge. Alas most of the questions didn't have anything to do with geekiness, they were about pop culture. An entire round where they played sound clips of introductions to tv shows where the character did a monologue. We were to name the Character that did the speech?! Not a round to be won by someone that hasn't watched tv in 21 years. Nicolas did enjoy his flight of beer though.  I told him that it looked like the drinking competition for Raiders of the Lost Ark. 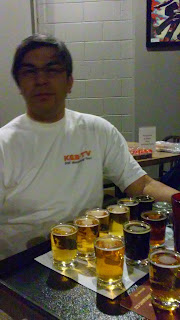 The rest of the evening was rocking with Nicolas's friends at the Milk night club. Nicolas had a fabulous time as you can see. 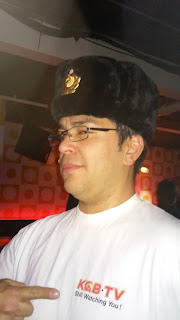 So much so that he had finally woken up by the time I got off of work the next day.  He was quietly folding laundry & just wanted a good hamburger then run some errands on the Birthday day itself.  Other people's birthdays are so fun much more fun then my own.  Of years creating huge celebrations for myself its nice to do whatever the other person really wants to do for their day so they don't have to do it themselves.  Happy Birthday Handsome!