Back to the Honeymoon - Cambodia 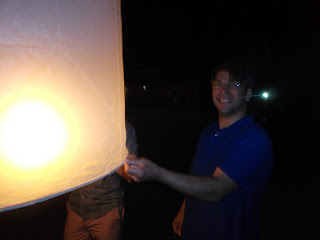 So where were we...aw yes, leaving Thailand to Cambodia. The night before we had farewell dinner at a restaurant owner's house including cooking lesson. Before we headed back to the hotel we lit what the Alaskans call Dry Cleaning Bag Hot Air Balloons. A tradition in Alaska for the Winter Solstice; a tradition in Thailand in the beginning of November for their version of festival of lights - Loi Krathong. They are so accustomed to making them that the craftsmanship is amazing. No dry cleaning bags folk, tissue paper. Instead of Sterno, cut up toilet paper rolls soaked in paraffin. I'm definitely going to try that technique next winter. 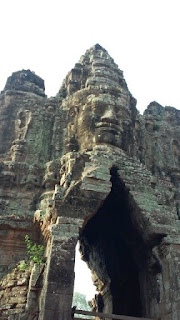 Cambodia is no joke to enter, be prepared. If you didn't purchase your visas before hand a little extra might be requested depending on your customs officer if you know what I mean. The heat was oppressive to be expected but unlike Thailand, Cambodia is very open so more airy. 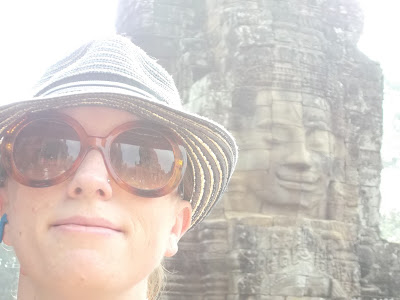 What seemed obvious but unexpected was the elderly French & Germans. Obviously Cambodia used to be a French colony & lots of them still come. Also the amount of elderly because Angkor Wat is on a lot of peoples' bucket list. Unexpected because Angkor is not for the weak, a few heavy traffic areas will have wood bridges but the majority is climbing over boulders in the jungle in the heat. 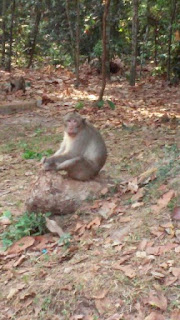 The first day we spent the morning in the Angkor Thom looking at the Bayon Temple with more than a 172 giant smiling stone faces. Then onto the Elephant Terrace and the Terrace of the Leper King. All of which were an incredible climb...then a wait for the Chinese tourists to stop taking selfies so I could photograph a the temples.  At least during the wait I had a great discussion with a Russian lady to talk about the iterations of Vishnu & Buddha.

Nicolas laughed as I was excited about the monkeys, only to get mothered by an Indian woman named Mrs. Gupta. She scolded me that I should not be so enthusiast to see monkeys when they are pests back in India.  She said that I wouldn't find them so adorable making a racket on my roof while I was trying to sleep. 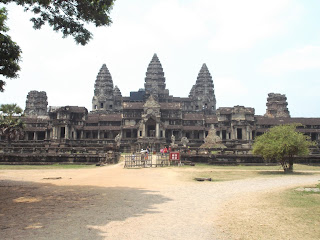 The evening we came back to visit the stunning Angkor Wat, a temple dedicated to the Hindu god Vishnu. World famous for its beautiful and splendorous bas-relief galleries surrounding the entire bottom floor of the temple. 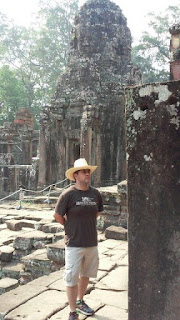 Two of the galleries were battle scenes that I could tell from the Mahabharata. You can tell which gods are which from the totem animals that they ride into battle on. Before you think that I'm an expert in Hindu mythology- I'm fascinated in corbelled architecture & have watched a bit of the nine hour long Mahabharata tv series:)

The other two galleries are of the churning of the sea of milk from where the gods and demons received their immortally & the 32 hells and 37 heavens of Hindu Mythology.

We climbed up to the top and holiest quincunx to watch the sun set.  We were very luck to be allowed up there. It was closed for quite a while after a Japanese tourist fell down the towering stairs to his death.  Trust me on this one, those stairs are unforgettable. 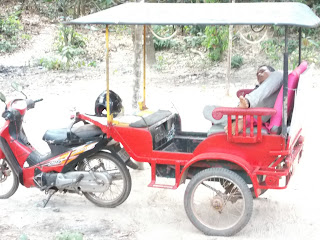 The next day Nicolas & I went to explore some of the smaller temples on our own.  To do this we had our own tuk-tuk driver. For $15 a day, he will drive you where you want & wait for you.  A side note, I must say the Cambodians have the art of public napping down to a science. In the heat of the day, the drivers will have a hammock slinged up in their carts, old ladies will be napping under trees & shop owners will be sleeping on top of their counters. 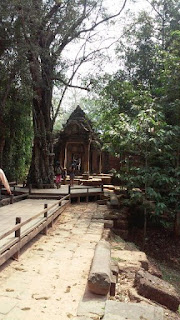 I desperately wanted to go to Ta Prehm to see the only goddess shrine in the country- the Lady of Light. A very under visited temple most of the locals cannot tell you where the shrine is, but Nicolas left me to sketch while he went hunting. He found from the locals that they call her Lucky Lady and gave him general compass directions. 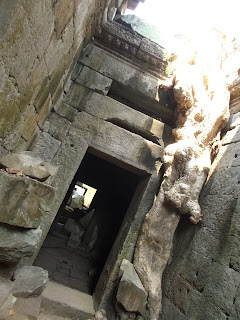 Through dark, half-galleries with collapsed walls we traversed. Crouching down to make it through four foot doors we found her. Though Ta Prehm is a ruin that has not be renovated, there were still offerings left out to the Lucky Lady and a mat to unroll to prostrate with.

Nicolas & I sat in a cafe that night eating crocodile pizza while listing to the strangle bar music.  We had gone to see the Lucky Lady on St. Patrick's Day in Cambodia.  What a fantastic honeymoon.