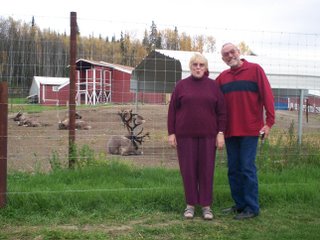 My parents were in Fairbanks last week staying with me. It was wonderful! I've never had anyone come visit me before so the excitement wore me out. I bought food & a bed..things that I don't normally do. The food was simple, not the bed. We have one sole furniture store; they wanted $900 for a double. The only other place is the grocery store & that was the same. I thought that Sears would have but it was 'we can order it & it will be here in 2-3 weeks.' (That's what everyone says if you can't find something in a store.) Luckily I found a wholesaler that had reasonable prices.
While my parents were here we went cranberry picking, driving to the pipeline, swimming in the hot springs & most importantly...bringing home the Vespa. My Mum lovingly cleaned it then we hauled it down a flight of stairs into the basement so I could work on it during the winter 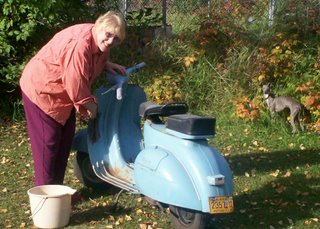 .
We had to take the doors off & tie ropes around ourselves to lower it down..quite the ordeal. When the cowl came off to look at the engine, it looked like 50% engine & 50% black, electrical tape. This is going to be an adventure.
Towards the end of the week my new roommate of a month found out that her job wasn't going to work out & was going to move back to Anchorage- that weekend. If my parents didn't worry enough about me already. Luckily my old roommate came to the rescue & hooked me up with Ju Yeong. I'll be moving in with her at the end of October. So we had to haul the scooter back up the stairs! Ju Yeong is wonderful & she has a heated garage:)
My parents returned back to Denver Saturday morning. I spent the weekend in a bellydance workshop with the amazing Morocco. Morocco is one of the mothers of American Bellydancing. She's been dancing professionally for 47 years. I first balked at her schedule because she was going to have us dancing 6 hours a day. Then I found out that she was 67 & didn't worry about it. How wrong I was?! At the end of the first day I was icing my joints & soaking in a bath. I was even more impressed when she went on to perform in the hafla that night. It was a special night because I got introduced to the community. I auditioned for the professional dance troupe a couple weeks ago & got in. I've never auditioned for anything before & there I was being appaluded while receiving flowers. It was so surreal that I was waitig for the blood to dump on my head like in Carrie.
Miss you more than the all the furniture my roommate took with her,
Victoria
Posted by Miss Victoria Regina at 7:04 PM
Email ThisBlogThis!Share to TwitterShare to FacebookShare to Pinterest
Newer Posts Older Posts Home
Subscribe to: Posts (Atom)