Relocation- Day Four: Today I tried to do a 668 km push to Edmonton. The first chance to be in a city that has a real art museum & I want to see it! Unfortunately I didn't make it.

Around Pink Mountain there was massive construction. In Canada, where there is only one lane going each way, that means waiting in line for a pilot truck to guide you through the mountains. The other direction has to wait while you come on through & vice versa. This happened three times. All of the semis that I was driving with had to come to a complete stop. So when they started back up again a lot of gravel got kicked up onto my truck. Which means that I have a crack in my windshield now.

After the mountains I got cell phone reception again! By the time I got to Whitecourt I had to eat. I stopped into a Humpty's (they are like Denny's). They have a more British diner menu so I had a Banger & Egg. Once again, like in the Yukon, the egg yolk just didn't have the same colour in it like US eggs? Is it genetic modification or do they just cook them differently?

After my egg I lost complete steam & look at the neon sign across the road there in Whitecourt. I walked across the street & stayed a night at 'The Ritz'. I was dubious but it was a great price, allowed dogs & the room was rather nice. Ofcourse, maybe I thought all of the dives that I was staying in were nice because they were not the inside of my truck.
Posted by Miss Victoria Regina at 10:57 AM
Email ThisBlogThis!Share to TwitterShare to FacebookShare to Pinterest

Relocation: Day Three. Today is the big 600 mile push to get to Fort Nelson. The lady @ the Vistor Bureau in Whitehorse suggested that I stay the evening at the Laird Hot Springs. But after going to a hot springs the week before & having to take a worm out of my neck I decided to stay far away from Laird. That, and what do you do with a dog @ a hot springs?

So I left the hotel @ 5am to make good time....& to avoid any damage charges. I had this plan that I would dye my hair a brilliant colour for the trip so incase I was abducted, my friends could start searching on my route for a woman with fuscia hair. The bathroom was covered in fuscia even as much care & cleaning I did afterwards. The next problem about leaving that early in the morning is that the gas stations aren't open that early. In most of Canada, they don't have pay-at-the-pump plus they prefer to fill you up themselves (and to get the dogs off of you). But I did find one blessed station that was open. I was wearing camoflague pants so they gave me a 10% off redneck discount & paid for my breakfast!

My lunch break spot was Watson Lake. I made the assumtion that if they had the famous Sign Post forest that they would have food options. I was wrong. This picture is just a small segment of the forest. They are about 16 feet tall so I took the picture from across the road. 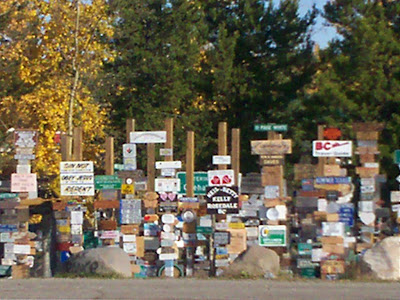 They was a lot of stop & go when I got into British Columbia. Many wildlife: caribou, elk & bison. Canada & Alaska that the only wild herds of bison on the continent. The do love to stand in the road. There is something about the gravel that they use up here that keep a certain type of burrowing flies away & so the herds love to stand on the roads. I'm not joking. So you have to patiently wait for them to move. 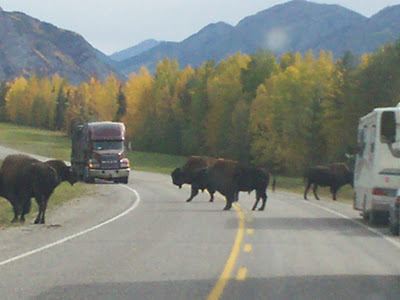 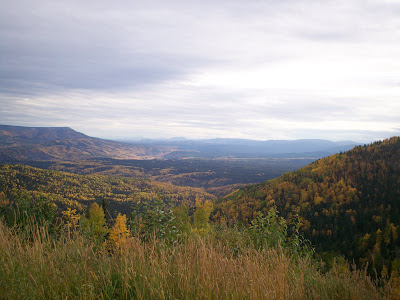 It was completely fall when I left Alaska so getting past the Canadian Rockies some of the green started showing up as I drove back into Summer. Very beautifull plateaus started to show up but the lakes still had the same glacial minerals that made them the aqua blue. 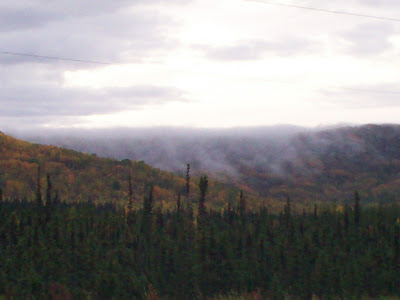 I think that very rarely can you find a little piece of heaven. But the last of it was in Toad Lake. I pulled into this gas station & was ofcourse greated by their freindly dogs. I went inside and the elderly store keep was baking over an iron oven. She pulled out peanut butter cookies & gave me a hand full for the road. 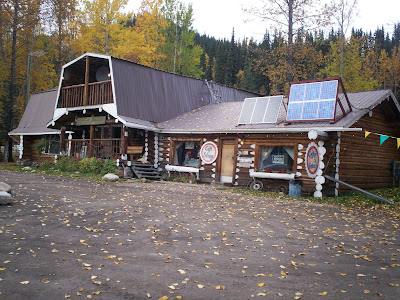 If you were wondering what Itchy was doing this entire time. Hanging in there, tough relocation. 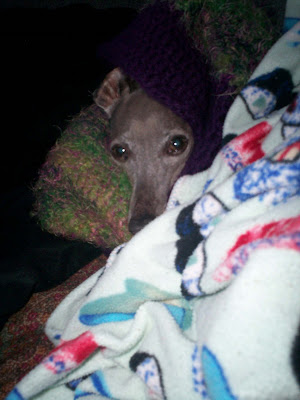 She needed her rest because we soon started to see fence posts! The first ones in the entire trip. Which meant that we were at the end of the Alaskan Highway, Mile 0, Dawson Creek. Dawson Creek is not to be mistaken for Dawson City where you get shots in a bar with frozen toes in them....but that's an entirely different story. We took a walk around and Itchy was a hit! You would of thought that the circus was in town. Entire groups of people were coming out of the stores to see what in the heck she was. 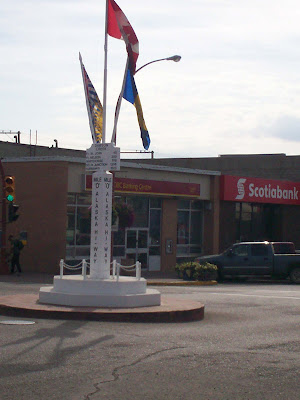 The land went flat after that & soon we were into Fort Nelson. I thought we would stay at the Ramada & live it up, but it wasn't that fancy. They had 'special' rooms for those traveling with dogs which meant that we were sleeping in a glorified kennel with tile floors and metal doors. The clerk was nice though & let me go behind the counter to use his computer to let everyone know that I was alive. No cell phone reception yet.

Posted by Miss Victoria Regina at 9:41 AM
Email ThisBlogThis!Share to TwitterShare to FacebookShare to Pinterest 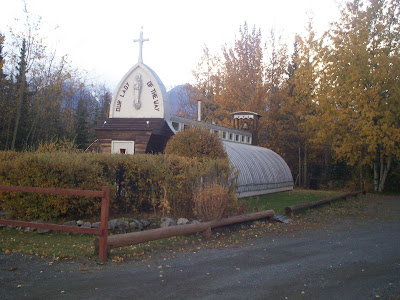 Relocation, Day Two: Awoke above the bar early to get out & have a real breakfast to get on to the status quo. Haines Juntion is a Man Camp, meaning that its mostly men working, trucking or hunting around. BUT one of my coworkers told me that they had opened a Bakery across from the Vistor Center. A hope of something nicer than gas station coffee! Unfortunately it was closed for the season. So I took a picture of the church in a World War II quionset hut then popped into the diner. When I say Man Camp I mean it, everyone in the diner was male. 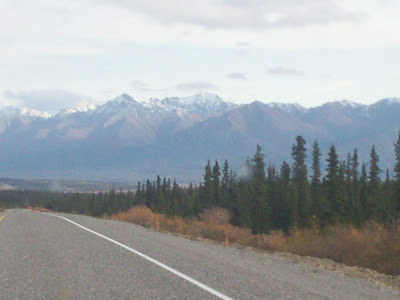 My goal for the day was to drive a couple hundred miles to Whitehorse & spend the afternoon there. I had heard of Whitehorse from the Yukon Quest. Its the other end of the race. Plus, the girls from Tundra Caravan bought me a Natahlie Parenteau piece & her studio is in Whitehorse. So I intended to pop in to see her. Ofcourse, when I got there, she wasn't. So I took a walk around downtown whitehorse to look @ all of there history of Good Time Girls. If you are ever in Whitehorse during the summer, go to see their famous can-can show. They are popular in the Yukon. I got to also see something completely new. A wooden skyscraper! 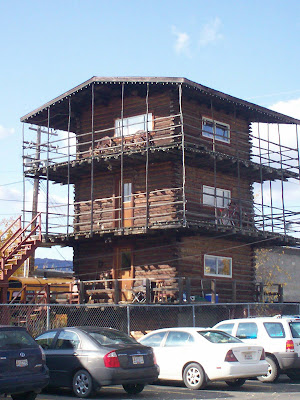 I also didn't know that Whitehorse had a Beringia Museum. I love dinosaurs & was working at Bettisworth North on a Beringia Museum design for the town of Nome. So I definately had to go to this museum.
If you are unfamiliar with what Beringia is, it is the lost sub-continent that connected EurAsia with North America during the last ice age. There was actually several Ice Ages during a 70 million year history but most importantly it was when Mammoths, American Lions, Stepe Bison, Mastodonts, Gomphotheres, early horses & camels, Giant Sloths, American Scimitar Cats & Giant Beaver existed in Alaska & the Yukon. There skeletons are found everywhere & a lady once had a fence in Nome made out of Mammoth tusks! 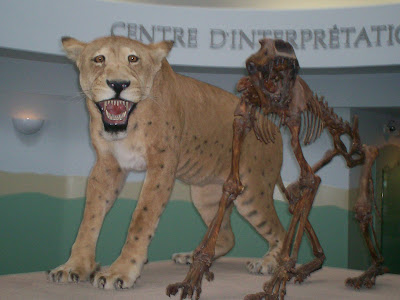 Some funny curator thought it would be hilarious to have the women coming out of the Women's Bathroom greeted by an angry Scimitar Cat. (Note: they can't be mistaken for Sabretooth Tigers.) 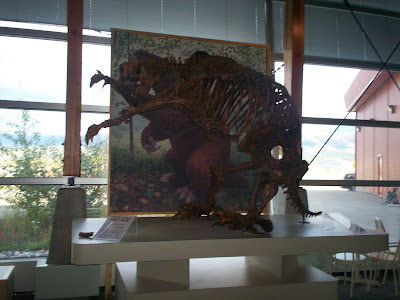 They had taken down the skeleton of the giant beaver so I took a picture of the giant sloth that is 10 feet tall! The most horrifing part of the exhibit is the Giant Beavers because they were the size of a Yugo & were MAN EATERS! Can you image existing in a world that beavers ate humans! The Tlingit have a historic tale of the Wanderer that went up to a family of Giant Beavers and killed the mother & the father infront of the babies. He told them that they better not grow up or they too would be killed like their parents. And supposedly that's the reason we don't have giant, man-eating, beavers anymore.
Miss you more than fuzzy little creatures, V

Posted by Miss Victoria Regina at 9:33 AM
Email ThisBlogThis!Share to TwitterShare to FacebookShare to Pinterest

Relocation minus day one I went to pick up the Uhaul trailer. I had rented from them before but this time they tell me that I have red & amber lights so I need a convertor put on my hitch so I could use the trailer. I'm in a rush at this point because my friend Rachel has been holding the Vespa in her garage & is taking a couple hours off at work to help me get it in the trailer. $239 & 2 hours later I'm out at Chena Hot Springs Road loading a Vespa into the back of a trailer on my own.

I didn't get everything packed into the back of the trailer before nightfall so I had to finish in the morning. Which means that I didn't leave Fairbanks until 9am. I made it to Delta Junction for lunch.

I finally had the chance to stop at Mukluk Land and it was closed for the season. For everyone in Fairbanks, its similar to Pioneer Park. 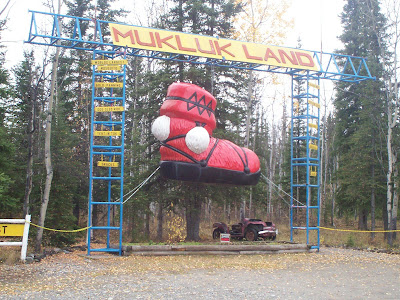 I was inspiring to camp that evening @ Kluane Lake since I had been there before & knew the land. It was getting late & my travel around the lake to get to a camp site was delayed by the lack of pavement. Three years & still no road. I was slowing down to pull into a campsite when I had to seriously brake....for three grizzly bears walking across the road into my site. 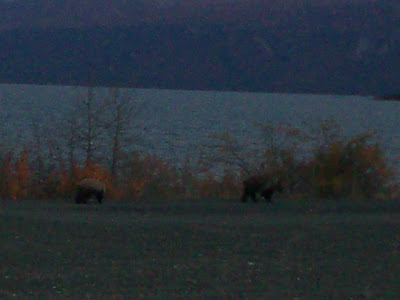 Sooo- I kept on driving & pulled in late to Haines Junction. One stop light that doesn't work, a plywood painted RCMP(Royal Canadian Mounted Police) car, & three hotels....all of which were full. So I went to a bar & the bartender let me sleep in one of the rooms upstairs. Not bad if you don't mind a room that has car fresheners hanging from the ceiling & a bar bell ringing to the early hours of the night.
Posted by Miss Victoria Regina at 1:23 PM
Email ThisBlogThis!Share to TwitterShare to FacebookShare to Pinterest
Newer Posts Older Posts Home
Subscribe to: Posts (Atom)