The Fall is definately over

As I sit here in bed at eleven o'clock at night with Itchy cuddling to my side while the wind blows the snow outside I just wonder, did it all really happen? Two weeks ago I was living in my cabin in the mountains & now I'm back in Denver. The Fall blew by way too fast. That isn't something that I was expecting when you live & work in a place that is constantly changing.

After I finished Family Camp I had a nice week off in Denver. Then I came back to my nice cabin that I shared with NO ONE (Itchy doesn't count). 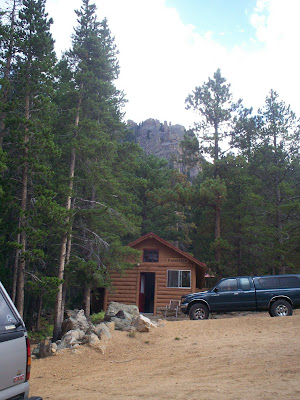 The cabin was called the Ponderosa & it was heaven. A double bed & my own bathroom. The bathroom was a bit of a discouragement because everytime to sat down on the toilet it made a clanging sound like you were the size of an elephant. That all got fixed the day it started leaking. Then the shower had its own tiny water heater that gave out two minutes and thirty seconds of hot water. First I bought an adorable strawberry shaped timer that ended up stopping one minute till. So I got in a habit of counting the moment I turned on the water. After two and a half months of this- now I can't stop counting everytime I take a shower. Then the wind was fierce one night and I heard a door banging. It was the locked down on the back. When I investigated the next morning the door opened to an old darkroom. I don't know a woman alive that doesn't twinge when they discover a darkroom adjacent to their bedroom. Thank goodness I had Itchy, everytime a child came close she'd bark them away from her cabin. 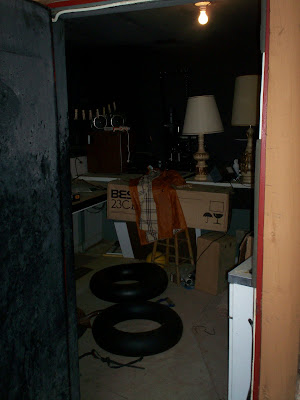 Working at camp in the Fall is completely different than the summer. You have school groups that come up between five to three days with no more than 120 campers. So your staff size narrows down from 250 to 8. That is a tight knit group of serious outdoorsmen. The majority of the counselors have degrees in Outdoor Science. I didn't even know that that degree existed. Wonderfull people that have no problem working any job that you put forth, but boring as hell. I have to admit that I'm probably one of them. Couldn't discuss tv with any of the school parents but there we were playing moonlight volleyball in the snow, heated Scrabble games, & a bizarrely Bradyesque, mid-July Christmas party.

No table manners at all! My coworker & boss Ruth Ann is the bomb but she won't let anyone eat in the kitchen with us if they don't have good manners. There is only so many times you can say, "Julia sit down while you eat." & "Julia close your mouth while you eat." to a 23 year old woman. But Ruth Ann treated me so well. She gave me breaks through out the day that I didn't have during the summer just so I could walk Itchy. A gem of a woman (eventhough she doesn't like children). I can only compare her to a zombie in the kindest sense. You know when you watch zombie movies and they only go one speed. The victims run & run but they can never out last the zombies. That's how we were. I would get focused on making 150 cookies for the day, working at top speed so I can help Ruth Ann out with the rest of the meal & by the time I was done she had completed the whole thing!

I have a hundred stories that I should of been writting this whole time but I just didn't like hiking down the hill to get a connection. It was a fantastic time. $50 a day but they've asked me back & I said that I might do it. They even offered perks! I get to be the only one on camp with my own cabin OR live on the edge of the mountain with my friend Alyse & our dogs & alchol privileges! Start May as a cook with Ruth Ann, then spend the summer as the Crafts Coordinator, then return to cooking in the Fall....plus I get a $5 a day raise! What has me confused is whether I'm supposed to be excited or not.

Miss you more than smashing a roach on my bedroom floor, going out for a hike, when I return ants are dissecting & moving the roach like an LA chop-shop- V
Posted by Miss Victoria Regina at 11:04 PM
Email ThisBlogThis!Share to TwitterShare to FacebookShare to Pinterest

I went to my first Lolita Party. Hard to believe for someone that has been fascinating about it for soooo long. My friend Andrew & his wife J9 have closed there Japanese pop culture store, Gimme Gimme Pillow Toast, so now they are throwing parties outside of the store & pop up sales. I'm sad to lose their store but happy that they now get their weekends back. This Lolita Choco Party was hosted by them. How could I turn down such a wonderful combinations: held at the Boba & Crepes restaurant (my two favorite foods), with some 30 girls in Lolita clothing & everyone brought homemade chocolates....except for me because I'm allergic to chocolate. But that didn't mean that I could eat some of them. I had to grab one of the cake-pops because they were so beautiful. Then I tried a chocolate dipped potato chip...won't need to try that ever again....or the chocolate dentures. I do want to try to make the dipped marshmellow pops at home sometime. I was a strawberry flavored marshmellow, dipped in cotton candy flavored white chocolate, dipped in sprinkles, wrapped in shimmery celophane with a ribbon & a cupcake ring to close it. When I came home at 10pm & described this to my future brother-in-law he laughed & yelled to my sister,"Honey! Tori's not going to sleep for hours!"

I made some new friends. Some girls I met want to get together & make hats together. Then my new friend Jenny clued me in on this wonderful website. It is definately in the shit i'm digging category. Check out Retroscope Fashions: 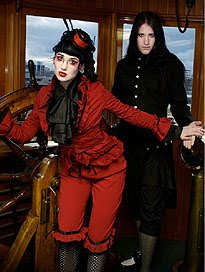 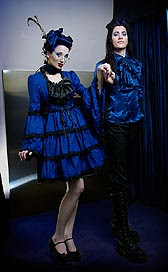