Fall in the MidWest

There is no other season I enjoy more than the Fall. It seems like the beginning of a big nap. The Summer festivals are over, the studio is cleaned out, the neighborhood kids are back in school and I have time to start over again. Just yesterday I was walking Keylow past my community commons where a group of boys under the age of 11 paying a game of football. Just as I walked past, I hear one of the boys say,"Ok guys, I Need A Cigarette." I stopped in my tracks to see which little boy was a chain smoker. It was the QB, and as he repeated the phrase again, I realized that it was the call for the play. When I came back around the commons after I picked up the mail they were onto another play, "Not Your Mother." It was amusing to me & the kids but goes to elaborate on the people that live in my neighborhood.
Charlotte turned 4 this Fall. She's such an enjoyable niece. We spent the evening eating cake and swinging on her new swing set. I couple write volumes about her but I will move onto the subject of this blog - the MidWest.
This Fall meant traveling to the MidWest for Nicolas's cousin's wedding in Michigan. Neither one of us had ever been there so it was going to be an adventure...and trust me, speeding & trying to navigate with a Garmin is a horrible adventure. So don't ever ask me to be a co-pilot, I might go into shock. You know what else is shocking? Going to the Michigan in a heat wave. It was 92F with 99% humidity. Why Nicolas napped in the hotel room the first night, I went to Walmart to salvage whatever summer clothes they had left on the clearance rack. So I will minimize the pictures in this post. With only a few items of clothing, it looks like we went everywhere in a few days. 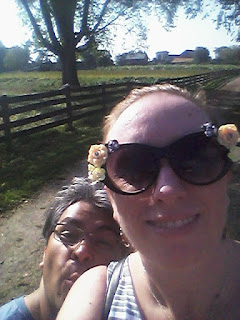 We had loads of fun otherwise. There are two Michigans, Detroit & the rest of Michigan. We only had enough time to go around the Detroit area. A must is the Henry Ford Museum. The Museum itself is nice, especially the glass gallery, but I would of rather spent the entire day at the Greenfield Village. The inn served a filling meal based on the 19th century then we walked around to see the historic buildings relocated to this village by Henry Ford. 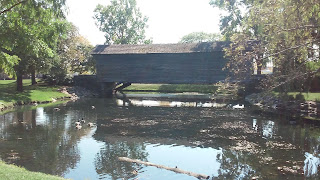 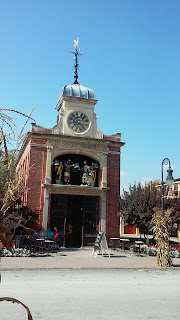 Next we had to make a stop to the Cass Corridor. We heard that Jack White had set up a record making shop there...and that they had a recording booth. My father had told me about a little toy he had when he was a teen that had blank wax records & you could record your own record. It was popular in the 30s through the 40s to send recorded postcards...and we were going to make our own. The booth was about the size of an old telephone both and your got Two minutes- that's it, no B Side. The staff was the nicest people ever, and let us use another booth they had that made yellow and black Polaroids to go with our record. One sweetie photographed us making our record.
After Aaron & Lindsay's lovely wedding reception we hit the road to Canada. I have spent plenty of time in Canada (see the older blogs), but Nicolas never has so we decided to go to Vancouver. We had the trip all planned then decided what the hell, lets go to see Niagara Falls. I was the idiot the decided to go on the back roads for a bit & it really made the drive long. By the time we got there we just wanted to jump into the Falls.
Vancouver was nice. Another big city with lots of history. We went to some of the local highlights, the Distillery District, Casa Loma, Fort York & The Beach. The highlight for me was Airbnbing and not staying in a hotel, going to the Vancouver store of Mokuba, getting a tour of WildHagen's millinery studio and eating Poutine with Nicolas for the first time.

Most people need to do their family vacations based on their kids school schedule. Since we're flexible with our schedule we've really started to enjoy Fall vacations. By the end of September, the crowds are gone and the leaves are turning. Most tourist spots give you a personlized tour or let you stay after hours. In the future, if our busy schedule permits, we'll avoid Detroit entirely & drive up the 22 through the Tunnel of Trees in the Fall.
Miss you more than maple-cream-filled cookies-V
Posted by Miss Victoria Regina at 5:31 PM
Email ThisBlogThis!Share to TwitterShare to FacebookShare to Pinterest
Newer Posts Older Posts Home
Subscribe to: Posts (Atom)