The Break down of Break up

There's that feeling that something is not right in your life. I haven't had the best couple of months. My Dad's illness has been solid. He was getting better in the hospital but then he was having secondary illnesses. Kidneys took him to the ICU; sleep medication made him sleep walk then slip & crack his head open; infections; getting out of the hospital for four days only to go back in. I want him to get better! There was still that feeling... the airport that I worked on in Alaska won an AIA Honor Award & was published in Architectural Record only to not have my name on it as one of the designers. There was still that feeling...driving home one icy night, my truck fishtailed & a kid in a car behind me hit me & spun my truck around on the highway. He was constantly calling me to not report it so he didn't get in trouble with the parents. There was still that feeling..

I went away for a couple days to the mountains to help my sister with her wedding planning. I told the boyfriend where I was but he seemed to have no concern. When I got home I decided to go out that evening. He was out at the same club but one of his friends asked me why I was there when he told him that I was not coming out. I was standing 10 feet away from him. I let him know that I was there but it was almost like I wasn't as I watched him holding every other woman than me. It sucks when you realize that you're the only one in the relationship. So I called it off with him right there. What a sad evening to be escorted home by a gay man who buys you flowers in an attempt to make things better.

Other then your own depressed feelings is having to tell the mutual friends. The ones that know you both as a couple. I only told a few so they would be in the know, but they always tell others like it was a wildfire. They do say two things, either they have been waiting for you to break up or they are sad too & don't want you to be. MY friends are of the later & were saying consultations like, "That's really sad Victoria, I knew you really liked him." HIS friends were awful! HIS friend's were making comments like, "You should of known when you started dating him that he was the bimbo of the crowd." or "You deserve better. Your like Yale & he's not even stupid." or "Tie down your girlfriends, he's single." or the worse being "Its sad that you broke up because one of my favorite personal traits about him was you." His FRIENDS! And I feel even worse because every comment that came out of their mouths I was defending HIM.

The reaction from friends is annoying but common. I was sitting at a table of girlfriends who were regaling me on how bad their own boyfriends were in bed. Freudian but point taken, I won't even talk to their boyfriends. The 6am text messages from girls wondering if their boyfriends were flirting with me. The questionable texts from men. The phone calls from other men wanting to take you out on a date even when they know that your feelings for the ex are not dead yet.

The only good thing about breaking up is finding out which friends are the good ones. The day after we broke up I went out with a girlfriend. We were eating a late dinner when in walks the ex..with a girl. General break ups involve an armistice period in which neither of you date to let emotions cool. Its not even 24 hours & he's onto the next girl. They're meeting up with mutual friends of ours. One of the friend's comes over to my table, he & my girlfriend are the crying & I'm numb. Terrifyingly numb. Like-I'm-Dorian Grey-&-scars-inside-will-be-revealed-to-revert-me-to-a-flesh-eating-zombie-kind-of-numb.

Obviously the lack of sleep has given me too much time to think. I have reviewed past relationships to discover that my recovery time has a mathematical formula. Take the time that I was in that relationship & divide it half to get the sum of time that it will take be over him. So could someone save a dance for me in six months?- V
Posted by Miss Victoria Regina at 9:03 AM
Email ThisBlogThis!Share to TwitterShare to FacebookShare to Pinterest

Back story- This summer I was the baker at the Cheley Camp's Boys Camp. One of my varying baking duties was to bake little cakes for the campers on their birthdays. This included the frosting & decorating. Not really in my bag of tricks & I felt mounds of guilt when it came time to give them the cakes. What is more dissapointing to a child away from home on his birthday than an ugly cake? They tasted great but I would have accidents like my "Peach Detox" cake. The kitchen only had three colours of food dye so if I wanted to get exotic I would need to mix my own colours. One day I decided to make a peach & lavendar polka-dotted cake. I accidentally grabbed the wrong colour when mixing the lavender & made drab green.

I was determined this winter to take a cake decorating class at Michael's to learn SOMETHING that would make my cakes better. My sister, over booked already, decided that she really wanted to take it too. So we signed up and had our first class on February first. In just that one class I got all the answers to my common mistakes without even having to ask them. Our instructor is fabulous! (I dread courses that take up half of your evening during the work week & then leave you with unanswered questions.) The first week was all about the three consistencies of frosting, how to properly bake a cake and torte it, and how to frost a cake...all of which I had been doing wrong.

The second week we needed to purchase our tools & prepare either a character cake or an 8 inch cake. The beauty of taking a class with your sister is that we each can do one of the projects & share supplies. Let me tell you, cake decorating is not cheap! $12 for a cake tin the shape of Wall-E!? How many Wall-E cakes are you really going to make? You can tell that I was going to do the character cake, so I wanted a tin that I would use various times. I ended up purchasing the sphere mold. My plan was to do a fishbowl.

We tag team shopped for an entire week, every evening. She would print up 40% coupons for Michael's and Hobby Lobby & we would each buy one thing at that store at a discount. Then there were all of the cake baking & frosting ingredients. Frosting is a foreign food to anyone that was raised by a mother who was on Weight Watchers in the '70s. She & I hovered over an freshly opened container of shortening like children raised buy wolves around a telephone ringing.

The next problem with cake decorating is who in the hell is going to eat all of this cake?! My sister volunteered us to deliver our week two cakes the next day to a Bake Sale for Haiti. Wonderful way to get rid of cake & help the survivors EXCEPT THESE WERE OUR FIRST CAKES EVER! That meant we had to perfect what we learned in class that very evening. To top it off, my sister promised one of the ladies at the bake sale that I would make a gluten-free cake for her to buy. Catastrophe! I added too much water to the batter so it bubbled while it baked removing all of the cake release. I beat the shit out of those molds trying to get my cake out & ofcourse one side broke. I was scurrying to get another cake mix & character tin....luckily I have a compulsive shopper as a sister & within the first week had purchase 10 cake molds. I just grabbed the star & had a slightly warm cake ready for class. In all we stayed up til midnight decorating the cakes with star tips. I did three cakes- the star cake & two halves of the spheres. One was broken so that one we gave to my sister's coworker for free. 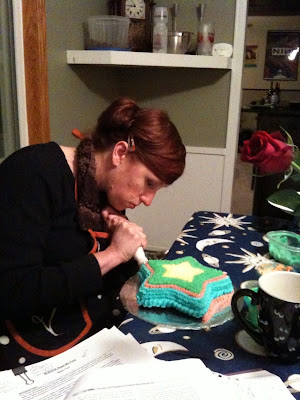 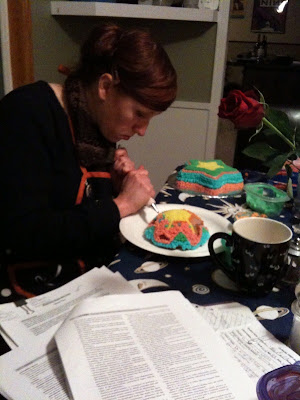 The broken cake that I did as a flower cake. 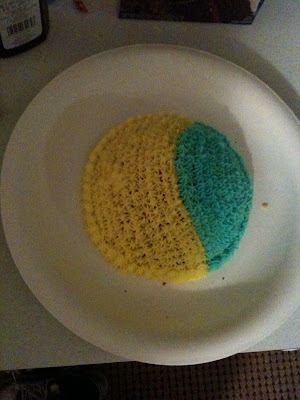 You can't have a star without a moon, perchance a quarter moon? 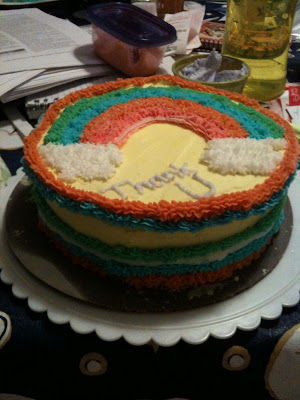 My sister did the torted 8" cake that was a lesson how to transfer images with piping gel. It has a rainbow on top- aww:)

My sister is more intense about this class than I am. She has the crazy notion of doing her own wedding cake! In search of practice she volunteering to do the birthday cake of her friend's 7-yr-old's birthday. She said she wanted a Penguin from the Littlest Pet Shop. I did the design & drawing, my sister made the cake & the crum layer. Then we frosted it together. 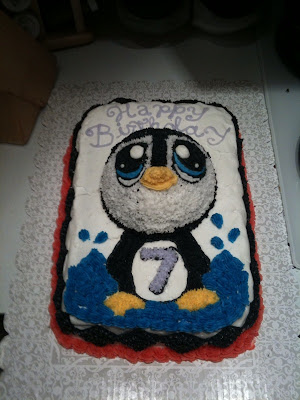 It was a smash at the party. So much so that were asked to do another...FOR MONEY!

Miss you more than buttercream on the lips- V
Posted by Miss Victoria Regina at 4:42 PM
Email ThisBlogThis!Share to TwitterShare to FacebookShare to Pinterest
Newer Posts Older Posts Home
Subscribe to: Posts (Atom)