Dance your feet off 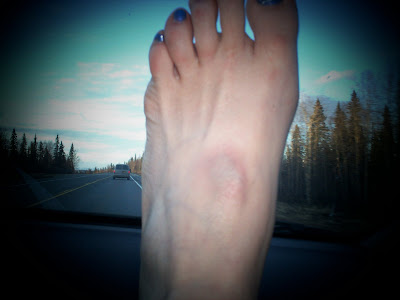 This is a picture of my left foot on Jessica's dashboard @ 9pm on our way back from Anchorage. We spent the weekend there performing @ a 'circusque' show called Carpe Nocturne & then two days of intensive workshop with Urban Tribal out of San Diego. It was fantastic, I learned some slick new moves, got to go out dancing, ate a falafal with a moose in the parking lot & got an 85% discount on shoes. Then Sunday afternoon we were learning how to spin around on our knees. If you want to try this at home you're supposed to use the top of your feet to brake. I did & discovered that I have 'sensitive veins'. At least that's what Heather Stants, the instructor, said as the dancers around me shrieked when flesh on the top of my foot rose up an half an inch with the veins just pumping away. It didn't feel too bad but gross to watch.
This morning I went to the clinic & they made me get x-rays incase I have a hair-line fracture. I should know in two days. The doctor gave me some good advice, "You're supposed to walk on the bottom of your feet, not the tops." Until then I'm stuck wearing flip-flops when I have such a need to use my feet. My scooter is ready for driving & I have a big performance in two weeks that I need to dance on my knees:(....plus, I got another breakdancing video in from Netflix.
Some positive news is that I might of won the Nenana Ice Classic! I chose April 27th @ 2:30pm & the ice broke that day @ 3:47pm. My coworkers said that people get down to the exact minute. Is it bad that I have hope?
Miss you more than staring @ a pulsating wound for 357 miles,
V
Posted by Miss Victoria Regina at 8:01 PM
Email ThisBlogThis!Share to TwitterShare to FacebookShare to Pinterest

Ensign Regina reporting: ArctiCon (Star Trek Convention) went off with only a couple hitches. (The dressing room smelled like bananas. Plus a creepy guy was putting on his costume over his clothes & wouldn't leave while we changed costumes.) The crowd went roaring crazy over our Borg "Asshimmilation" dance. There were actually guys lined up outside the dressing room, we got interviewed for a documentary & our picture ended up in a local entertainment magazine. Which ofcourse landed another job next month dancing @ a speakeasy called the Monkey Ball. We travel down to Anchorage this weekend for a performance & workshop with the delicious Heather Stands. Which means from here to the beginning of July I'll have a performance every weekend. I even have a performance in Denver on May 20th @ Casa Blanca. The fabulous Phoenix asked me to do a little dance....I'm so nervous, I've never danced in a restaurant before. 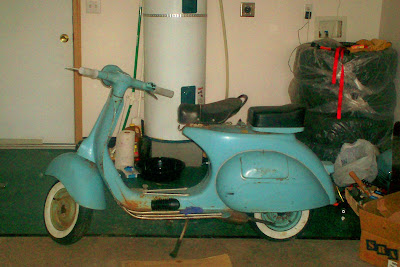 Major moves have been made on the scooter now that I'm not working 7 days a week. First I went to start the engine on Easter....I thought with this much praying on one day, the odds were in my favor. But they weren't & it didn't start. I wanted to walk infront of a bus but they don't run on Sundays. Instead I checked the spark & the compression & the fuel. They all worked but the float bowl was clogged. But I don't want to have a bucket of diesel sitting around the garage.

When I went into work on Monday my coworker asked if his kid's 2 stroke engine class could work on the Vespa! Joy yet yikes! I ran home & changed my tires from the original, dry rotted tires to my ultra-sexy, Continental White Walls:) Okay, the don't look as sexy as they should because I needed to clean the rear rim that had 50 years of exhaust coating in. For the first time in my life I had grease all the way up to my elbows. So I have naughty, greasy, finger marks all on the white.
Next I needed to take off the headset, detach the brake cable,drop the front fork taking off the front wheel just so I could change the lock. I love how the manuals don't exactly describe how to do this. The original manual calls for a Vespa Tool T001-1595....that no longer exists. The restoration manual shows you how to make the tool out of a pipe. I used a Phillip's head screwdriver, a hammer, & a piece of string. It went on perfectly:)

I got a trailer & drove it over to the school. Thursday I got the report that the engine started!!!! I drove around town looking for baby blue bubblegum cigars to hand out but they were no where to be found:( I won't see the Vespa till the end of the school year because I'm allowing him to work on any thing else that my need some care....like the brakes.

Miss you more than bubblegum cigars, V
Posted by Miss Victoria Regina at 7:08 PM
Email ThisBlogThis!Share to TwitterShare to FacebookShare to Pinterest

This is the time of year that you should never visit Fairbanks. Its warmed up to 46 degrees! That's above zero! But it still gets below in the evenings. So where it was pearly white a couple of weeks ago, now its slushy, dirty snow that turns to ice during the night. You have to remember to park at least 4 feet away from any building. If the owners didn't have the curtiousy to shovel their roof, you have the chance of having a 20 lb. chunk of icy, snow dropping on the hood of your car. Alaskas version of hail damage. Not to mention the people are crabby. I missed this season last year because I was relocating. I wish I was elsewhere right now.

After saying that, my last roommate, Tina, is in town visiting. I don't know why she's in town from Arkansas, but I hope to see her before she leaves on Sunday. I've had the flu for the past two days & have been camped out in the apartment.

Last weekend I was in Ester performing with Cold Fusion for the Ester Library Lollapalooza. I did my first solo with fans!....& I didn't mess up. Tada! It was a wierd location. Jessica & I walked in the front door & she said, "There's is some serious Pong in the house." Pong is Alaskan slang for B.O. Like the Atari game, that the little ball slowly moves across the screen until it hits the paddle. We were the paddles (Jessica is a born & raised Alaskan that used to get to grandma's house on dog sled so Atari is oblivous to her but its a term that they used in high school.) The concrete floor was freezing at this place but it was sweltering up top. For a first performance it went well & the audience loved us. Here's me eating some Bulgolgi in a Korean restaurant under the bowling alley. We were waiting for the cooking staff to do some karoke, but they were shy that night. 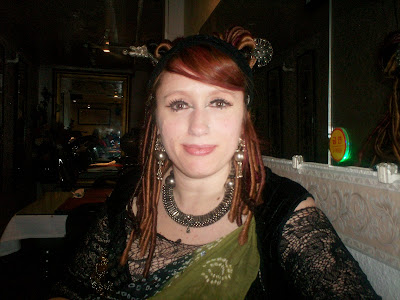 Posted by Miss Victoria Regina at 6:56 PM
Email ThisBlogThis!Share to TwitterShare to FacebookShare to Pinterest

Cabin fever is a dirty, dirty...con-artist. October you are lured in with promises of comfy evenings working on engaging projects. You happily skate through the end of the year with the distractions of the holidays. Come January you get hit with the nastiest weather imaginable only to discover that it gets worst the next month. By the end of March those projects have been spread out all over the place & your home gets smaller & smaller. Plus you realize that for the past three months, other than a couple of exceptions, you've spent everyday going to work & home. THIS IS WHEN IT GETS CRAZY. I went to a dinner were some of the women were in complete flannel & woolen, Alaskan wear other than they were wearing high heels...because they couldn't stand another evening of wearing boots. But that's cabin fever for you. If you've never experience this before, think back on any operation or dental surgery you might have had. Are you there? Remember the day after when you still have some sedation or taking pain killers where you feel like you just repeated a task that you had already completed or a thought you had only a few moments ago. That's what its like, a living reinactment of Bill Murray in Ground Hog Day. My receptionist says that any day now we'll start to read about murder/suicide combos in the paper.....& I might be involved.

I think that this might be a repeat of a previous blog so I'm going to change the spark plug & oil the pistons on my scooter then look at the swimsuits in the Victoria's Secert catalog. Here dry grass...where are you?!
Posted by Miss Victoria Regina at 11:34 AM
Email ThisBlogThis!Share to TwitterShare to FacebookShare to Pinterest
Newer Posts Older Posts Home
Subscribe to: Posts (Atom)