Now that the airport is open, I don't have to work 60 hours a week. I'm left with weekends to do...something? Since its summer that means I switch into summer performances. I dance atleast once every week. This past weekend I danced at Birch Hill (a cross country ski rec area) for the Clucking Blossom fest. I learned something very important; there's a reason why Folk Festivals are always FREE. But we had a great turn out of people that left the bluegrass performances to come watch us dance. Afterwards I wish I had a tape recorder. My voicemail would say, "Would the bellydancer with the tiny dog please come out of the bathroom?!" Good times...plus I got see a goat pulled chariot! Did you know that when they don't want to pull you any longer they just kneel down & let you slide backwards down the hill?

On Sunday I went to hang out with some local comic book artists that I know. I met these folks @ the 24 Hour Comic Challenge last September. They kept on inviting me to come it their Comic Jam but I was always in the office. I'm so glad that I had a chance to go because I had a great time. Brandon would of loved it. It had sessions of comic, surrealist-like games. Like this one: 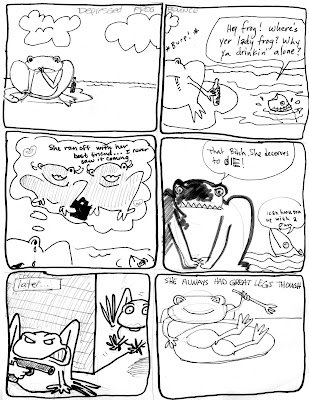 The jams are like round robins. The first person chooses a noun; in this example it was depressed frog. They pass it to the person on their right & that person chooses a verb. The second person passes it to the person on their right who has two minutes to come up with the first stile. It keeps on going around like that every two minutes with, in this case, 6 sheets rotating around the table.

The next experiment was even more surrealistic. This time you label your first page with a #1 in the corner because you can get these messed up because you're moving so fast. Then you're ready to get started.

1) The first person takes 1 minute to write down a noun. Then they fold it over so that the next person to their right doesn't see it.

2)The second person takes 1 minute to write an action. Then they had it to the person to their right.

4) The fourth person only gets to see the image at this point. They only have 1 minute to write a caption. Then they fold over the image & hand it to the person on their right.

So you see how this goes on for about a half an hour. This is what the first page looked like: 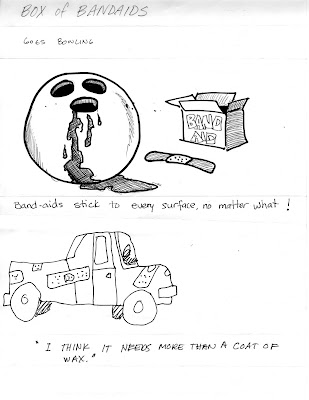 After the four pages we all stood up & did show & tell time of the sets. It was hilarious to see how they would progress & transform like a game of telephone. This one ended up with a cowboy getting his legs waxed.

Miss you more than the laugh I had on Saturday night when a 400 lb man told me had a Smurf tattoo, V

Posted by Miss Victoria Regina at 7:11 PM
Email ThisBlogThis!Share to TwitterShare to FacebookShare to Pinterest

I can't say that I get a lot of mail from product representatives on a daily basis, but I do get it on the weekly. Usually its for a new flooring material or some waterproofing membrane. But every once in awhile I'll get something fun like Tibetan shrines, Gothic ruins for your backyard or hidden doors in the bookshelf.

This week I got this from Sky Factory. The produce film images to put over your fluorescent troffers. You see them in dentist offices & such, but when I went into their portfolio they had this image from someone's family room: 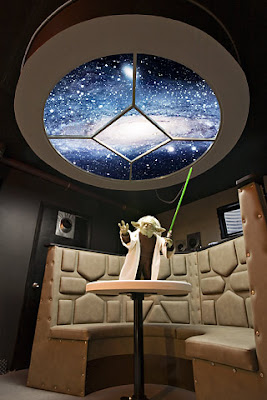 Posted by Miss Victoria Regina at 7:05 PM
Email ThisBlogThis!Share to TwitterShare to FacebookShare to Pinterest

The day has finally come! Two plus years in the making & the airport was turned on at 3:30am Alaska Time. Its been written up in the newspaper & talked about on the radio......thus far, the only complaints have been that there's too much glass. Its like trying to convince people to turn into the slide when they lose control on the ice- but I'm here to inform you that in large buildings LIGHTING is more expensive than HVAC. Sounds counter intuitive but its true. Happily I've been informed that there have been no complaints about the design:)

So without further ado OPENING DAY!

Here is the World's Most Expensive Bicycle Rack 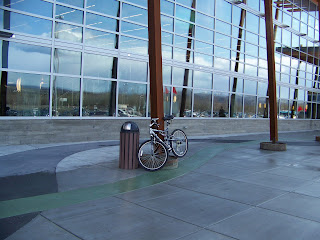 No lines at Check-In 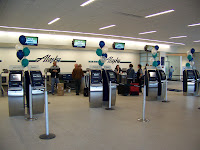 Follow the Caribou Tracks (& NO! There are no wolf or bear tracks WHY? because I LIKE ANIMALS WITH ANTLERS so don't go there!) 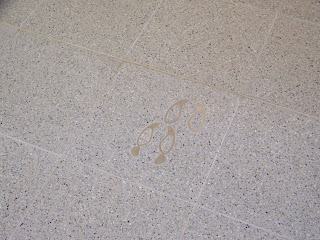 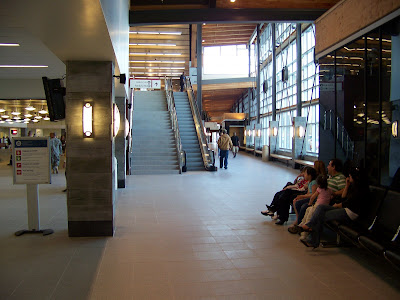 Up to Security Queuing: (yup, that's an ATV up there) 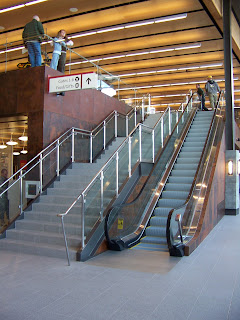 Greeter Lobby: what you are looking at is steel panels that each one was rusted. It came out sooo beautifully that the time it took to convince the airport to allow us to do it & the research to get it just right was well worth it. 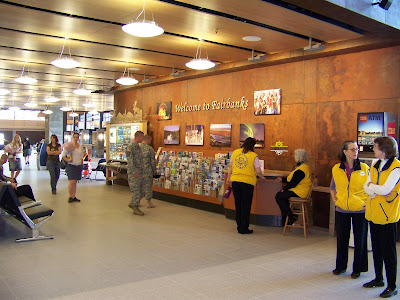 DINOSAUR SANDBOX: this was just a whim that I came up with after talking to kids about the "Airport of the Future". What started as a fence to stop back flow turned into a play box with art in a storefront system around it....note, the art isn't there yet so the glass is temporary. Once the glass is there it will have 3D glass suspended in laser cut still looking like ice flowing down the river. This little sandbox got its own page in the newspaper? 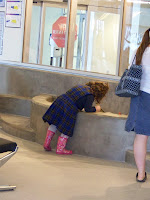 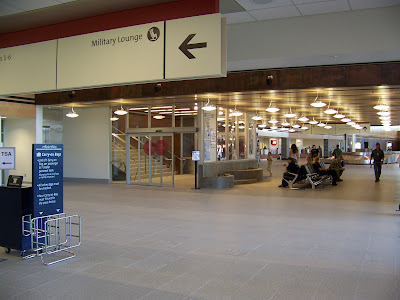 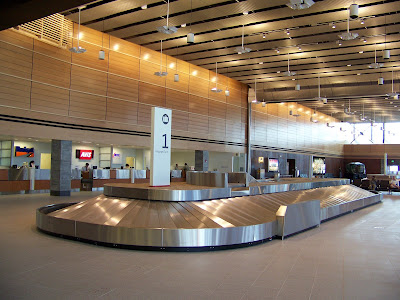 Looking from the end of Baggage Claim back to the Mezz: 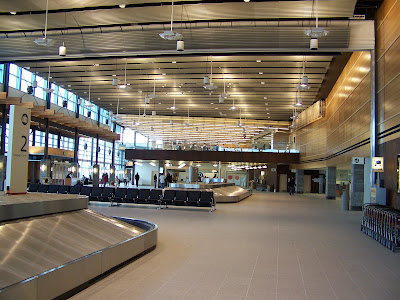 And this is for my Architect friends. Look at this detail & weep wussies! 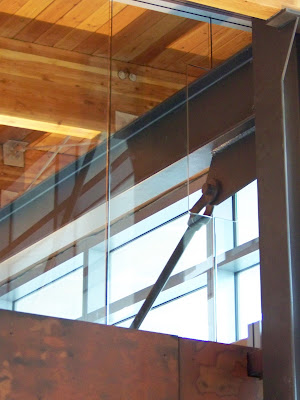 Miss you more than popping the champagne bottle,