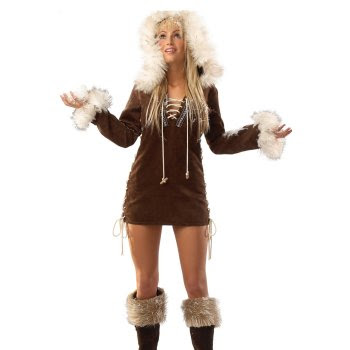 Today is my last day with the firm & I'm sad to go. I won't miss the eleven hour work days in the Artic during the winter-time but I will miss the people & the fun projects. BUT my day was brightened when I licked the envelope & dropped my last IDP record in the mail to NCARB(National Council for Architectural Registration Board). This means that I can now apply to sit for my licensing examinations. Whoop-whoop hands in the air!
This past month has been a fond farewell from the State. Crazy attention from Governor Palin abeated. But great weather and very Alaskani things everywhere. I turned on the radio & there was an ad for banjos!
Some great berry picking. I had one of those near death experiences picking raspberries at my friend Rachel's house. She was on vacation when her raspberries were in season. So she offered that I come over & pick how ever many that I wanted. I was expecting just a couple but in fact, Rachel could open a raspberry farm. They were everywhere & the largest ones were in a slough. I saw all of these golf ball sized berries hanging in there so I gracefull went to pick them through the bracken. What I had walked on was a tree fall. Ya' know, where rotting trees fall over a large cravass just waiting for someone to walk over it to break away to there death. Also a great place for badgers to live. I broke through & stopped falling at my waist but I was completely expecting my legs to be shredded by badgers in mating season. And if that isn't enough, I went back for the cranberries & while I was in the forest (like when am I out of the forest) it got quiet & I heard snorting coming from the trees. Just what I need, to be gored to death by a pissed off moose during mating season.
I have been spending some time with my friend Jennie. She had never been to Delta so I took her there. This is Rika's Roadhouse on the way to Delta. I love their crazy loooking chickens! 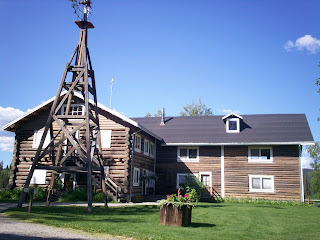 The building code is very leanient in Alaska. An example of this is this house you drive by on the way to Delta in North Pole. That's Jennie spazing out. 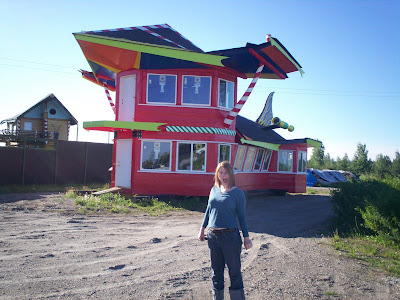 Itchy has become fully adapted to living here. She has discovered that the warmest place to sun bath is on the compost heap. Intelligent if you think about it. Not only is it in the sun but its producing heat because its cooking vegetative waste. Gone through a lot of doggy shampoo though. 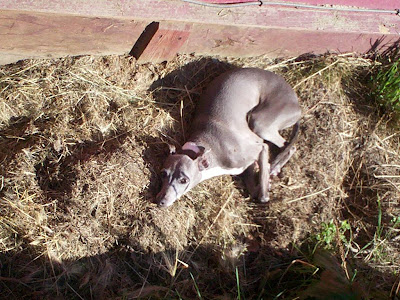 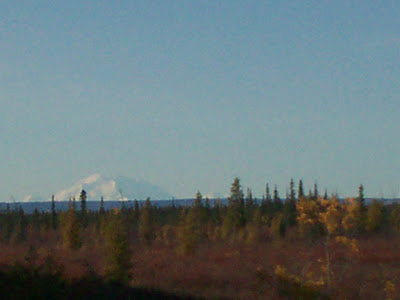 JENNIE TOOK ME ON HER COMPANY TRIP TO DENALI NATIONAL PARK. We got on the train @ 7 am in the morning. It took 4 hours to get down there because you travel at around 35 MPH. Plus we had to stop on the way because the brakes were smoking.

It gave me the great chance to take a photo of Mt. McKinley. You rarely get to see it because its covered by clouds. My lucky day. 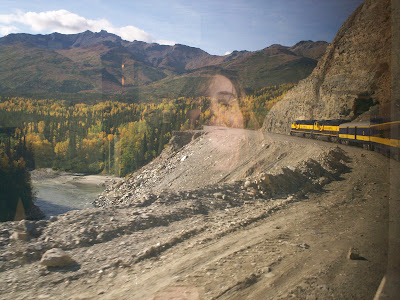 Everyone should have a cool shot of the train turning around the bend. That's Jennie's reflection in the window by the way. We were trying to escape 'The Fungus' which is a completely different & long story that I won't get into.

On the trip down we got served breakfast of what else other than Reindeer Sausage. 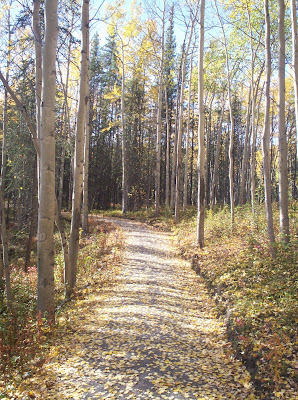 When we arrived at the park we first went to the vistor center to see when the buses to Savage River were leaving. Unfortunately for our timing, it was the end of the season so they had reduced the buses to one & it was running so that we would of missed our train back. Instead we went into Glitter Gluch to be tourists and eat lunch. The best burrito I had in Alaska was at the Salmon Bake--Halibut. Ofcourse, it wasn't a "real" salmon bake if you want to be technicial.

We came back to the park and took a hike. We had such a good time in the cool sun. I don't think it would of been as pleasant if we had gone a week before. There are two seasons of smells in the fall. The first decay makes everything smell like dog poop. The second decay smells like lillies or roses. You find a good spot and just stop to breathe. 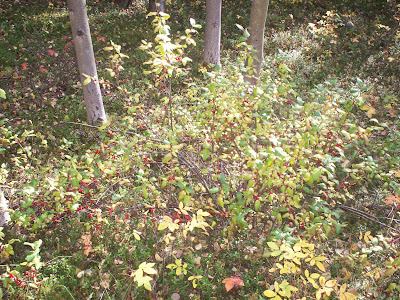 My friends in the Lower 48 don't understand when I say that I am going foraging. I had to take a picture of this bush as an example. You see all those little red berries covering it. Those are cranberries. Yum.

We were having such a lovely walk but I thought that we should turn around & head back. We were told to be back to the train by 4pm. At 3:52, I get a call from The Fungus asking where we were. The person that had our tickets said that we hadn't showed up yet. At that time we were right across the street. So we hung up & than he called me right back and I said this:

So Jennie & I jump on our car. Everyone in the car stand up to applaud us & take pictures. When they stopped clapping, I made an announcement: "Whoever gave my phone number to the Conductor---Meet me in the parking lot when we get to the station." They all laughed.

Miss you more than getting into arguements with men that KNOW how to wield a sledge hammer,
V
Posted by Miss Victoria Regina at 1:23 PM
Email ThisBlogThis!Share to TwitterShare to FacebookShare to Pinterest
Newer Posts Older Posts Home
Subscribe to: Posts (Atom)