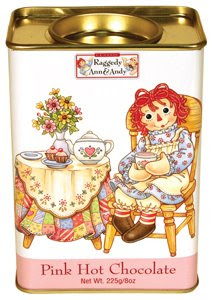 In a search for gifts for those that have everything, I saw a tin of Raggedy Ann Pink Hot Chocolate @ Sur La Table. {They do have Blue Hot Chocolate too but I don't find blue appetizing.] I didn't make a spectical of myself in the store but internally I went crazy for this. I went to plenty a tea party in Fairbanks with ladies that would love to have this. I didn't get it because it was $7.50 for 8oz. Its too small that the people that I would send it too would cherish it, never use it & let it turn into a block in their pantry. So I did some research & here's a recipe for Pink Chocolate:
http://www.foodnetwork.com/recipes/rachael-rays-tasty-travels/pink-chocolate-recipe/index.html
Now this recipe uses alcohol....great! but still expensive. So we need to come up with an idea to make it cheaper. I know that you can find white mocha powder but how do we colour it pink? Adding food colouring sounds like it would stain cups & lips? Give me your ideas.....
Posted by Miss Victoria Regina at 3:34 PM
Email ThisBlogThis!Share to TwitterShare to FacebookShare to Pinterest

New Way to Celebrate the Holidays 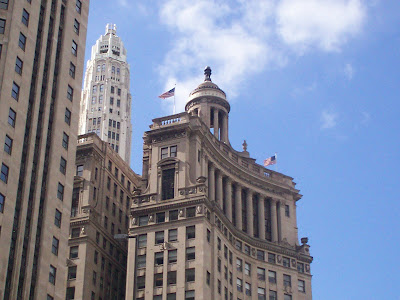 Everytime that you move you to a new city you have rediscover all of the basics like where to take your trash, which grocery store has pita bread & which ones don't, etc. Eventually the holidays will come around & you will have to rediscover who, where & how you are going to celebrate them.

This year I got lucky, I have family that lives in Chicago. More than one; an Aunt, a cousin, my sister's future in-laws, plus friends. So this year I got invited by my Aunt Judy to come to her house to celebrate a traditional Schmitz Thanksgiving. I had never celebrated an extended family Thanksgiving so this year was going to be a super special treat.

On the day itself, the boys & I stayed home & had hot dogs. Why hot dogs? First off, Jason makes the most delicious hot dogs. Secondly, Ryan's company gives them a turkey for Thanksgiving, so they decided to give it to the Women's Shelter. Later on that evening I went out dancing. Maybe that's a personal tradition? I like it; Thanksgiving is the most packed time in clubs other than on Halloween & NYE.

The next day I went to my Aunt's house for a great evening. That night I found proof, food does taste better when its made by family. Plus, there are some people out there that are capable of improving your self-respect for a lifetime. One of my Aunt's friends told me that in her next life, she wants her hair to look exactly like mine:)

Saturday I had business I needed to attend to downtown. Since I was going to be there, I decided to go down to the shops on Michigan Avenue to see the decorations. They were beautiful, the weather was great & there wasn't a huge crowd.....unless you were on the block that Crate & Barrell was on. The one store on the Magnificant Mile that can be found every five square mile in Chicago & everyone was swarming to it. They must of been out-of-towners because there were a lot of families coming out of the hotels that were there visiting.

There is a different caliber of people that shop the Mile. My first proof was when I was infront of the Walgreens. A Santa was ringing his bell for the Salvation Army. Not every bell ringer is someone transitioning from being homeless but this soul was. Now have that in mind- while I'm walking past him, a woman comes up to him & askes him 'Excuse me. Where's COACH?' He appropriately gave her a blank stare & continued to ring his bell.

Next I saw another pair of bell ringers outside the American Girl store. [If you don't know what American Girl is, its a doll store that makes dolls & outfits that look identical to the little girl. Kinda creepy.] They were women that were part of the army of the Salvation Army. Meaning that they had on the women's military uniform, hat & vintage cloak. One of the them was the bomb! She had totally prepared to work the American Girl store; she had puppet that look exactly like her, even with the Salvation Army costume! I now think that every bell ringer should have a miniature puppet of themselves:)

By the afternoon I was exhausted from sensory overload. I decided to take refuge in the Borders Cafe. This is were I regained some belief that our culture hadn't gone over board. A group of business men wearing designer suits & carrying their Monte Blanc bags sat down next to me in the cafe. Two french men & one American. When they got up to leave the two frenchmen walked away leaving their trash on the table. The american was still at the table & called out to them so that everyone in our vicinity could hear him, "Pierre, come back here. We have a saying in American that goes, 'Does your mother work here?' Meaning we bus our own tables." I'm sure they heard me giggle.

I'm clearly an unconsumer-zoned person. I used to think that I knew how to shop but I couldn't even pick out a pair of socks that day if I wanted to. I only know how to shop art stores & book stores. I don't know how to window shop. So I spent my day looking at the beautiful chandeliers @ Macy's; wondering who would buy an indiviual donut maker @ Bloomingdales (they have a Children's Home Kitchen section!); & checking out the season styles. Which if you are interested: large-gauge chain necklaces held together by vintage, diamond, costume brooches & sweater dresses that are made to look like the '20s with accordian lace.