Wim DeIvoye
Check out his Gothic Work made from iron gates & railings: 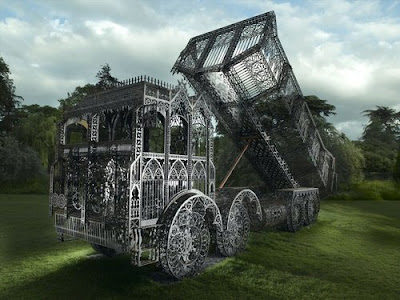 The stain glass windows in a chapel he did done with x-ray collages: 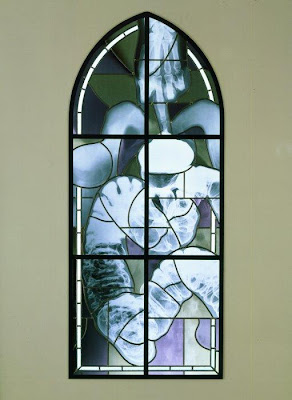 His team that tattooed pigs. His website shows step-by-step proceedure. This photo makes me think of group of sailors after their first night in port. 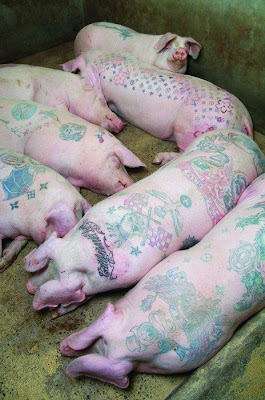 Go see more of his work at his website www.wimdeivoye.de
Posted by Miss Victoria Regina at 1:39 PM
Email ThisBlogThis!Share to TwitterShare to FacebookShare to Pinterest 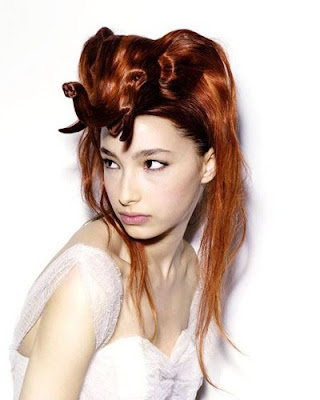 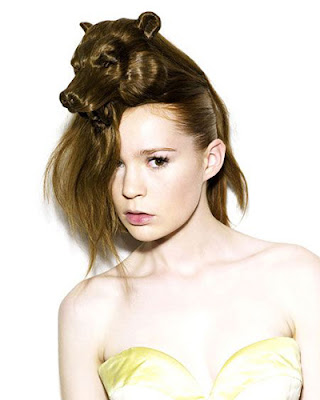 HAIR HATS! Nagi Noda is a genius!
Check out this website for more animals: www.uchu-country.com/top_en.html
Posted by Miss Victoria Regina at 3:10 PM
Email ThisBlogThis!Share to TwitterShare to FacebookShare to Pinterest

Do you remember my incidient last April at the Urban Tribal workshop? If you want to scroll down to that page it will tell you that I exploded a blood vessel on the top of my foot, went to the doctor & got x-rays that showed that I had been prancing along on a broken foot. They gave me Motrin, an ice pack & instructions to call them back in three weeks if the pain continued. It did so I did & they told me 'okay' call us back in three weeks if the pain continues. In that three weeks, I received a bill for $245 for Motrin & an ice pack. So I decided to take some time to contimplate which hurt more, the foot or the bill.

Well its been over a year & I now can't feel my toes on that foot. So I sucked it up, accepted that I had crappy insurance & then instead of a vacation this year I would get my foot fixed. This time not to the same PA. I decided to go to a friends office @ Interior Community Health Center. It doesn't have any fancy machines (like an x-ray) but they do have a sliding scale for payments. Plus I get to see an actual doctor!! I honestly thought that the only way that I could get to see a real doctor in Alaska if I got mauled by a bear.

At first I was dubious of this doctor because he went all over ligiments & nerves how they can do one thing & then feel a different way. He said to call him up in a week & a half if I hadn't heard from him to remind him to look @ my x-rays. At that point I wanted to scream but he took me very seriously a week later when I was a dance class & my foot cracked so loud that they stopped the class- then the next day it was as if my pinky toe was completely gone.

I have a Marching Fracture in my bone connected to that pinky. They call it that because it doesn't happen instentaniously but over long period of exerted use. Doing what you ask? Releves. But that might not be the cause of the pain & lack of sensation. So off I went yesterday to get an MRI. They sent me into the billing lady first to verify my information & she asked me if I wanted to pay the 20% co-pay. I said sure but then she hit me with $305 co-pay & I gasped. She asked me if that was alright & I told her 'No! but what's my other option- paralysis?' This is the first time that I actually hoped that they find something wrong.

I'll keep you informed,but until then I miss you more than coughing in an MRI & they have to start the whole series over again....twice, V
Posted by Miss Victoria Regina at 5:11 PM
Email ThisBlogThis!Share to TwitterShare to FacebookShare to Pinterest

It is sooo slow in the office recently. After you finish building an airport what do you do to fill up all that time you spent hours upon hours detailing & writting consultant correspondences? Surfing the web!

I've gotten into J-Rock lately & got set up on an announcement bulletin anytime that a band was coming to the US I would get a newsletter about when & where their appearance would be. The band that I'm excited about lately is Quaff.

They represent a new trend in Japan called Neo-Japanese. Instead of imitating english speaking rock groups, they are now trying to insert more traditional Japanese attributes to their music or look. It can range from bands wearing kimonos (with baseball hats) to using traditional instruments. Quaff does the later, they use the twin voice technique; UTA & TUZURI. Uta is the melody and Tuzuri is closely what I can compare to rap. The guy that does the tuzuri uses a fan as a prop....which means he's the only rapper that uses a fan in history. Femine to Westerners but in Japan, I've only seen yakuza (gangsters) welding fans, so I guess its very tough.

You can get their music online or you can download their latest lp [The Explosion] on itunes. My favorite song on the album is Saihara-no-miyako, if your computer shows Romanji. Or you can go see them in concert this month. Most Japanese bands play LA. If you are lucky they'll play Dallas. If they're really popular than they'll fly all the way to NYC. Which boggles my mind that Quaff is playing in Atlanta?!