First Streetpainting of the Summer

While I was in Denver I went to my favorite art store. Alaska only has one real art store & that is in Anchorage. They don't have a large supply so Meinger's in Denver is where I go to get my large Prang chalks. These are mandatory if you're a street painter. They are huge, filled with pigment & only $1.29 each! So I stock up when I'm in town. I tired to get chalk in Fairbanks but you can only buy it at Michael's & JoAnn's. The only white chalk that you can find is the children's kind.

I brought back enough chalk for myself & my two apprentices, Jennie Seay & Ellen Millon. These two ladies were interested in the trade so they accompanied me to my first street painting of the season. The parks department gave me the full rein of the parks in Fairbanks, so I chose Griffin Park because it is right along the river near the vistors' center. This is Ellen Millon's very first street painting. I can't remember the name of the artist but its called 'The bad Egg.' 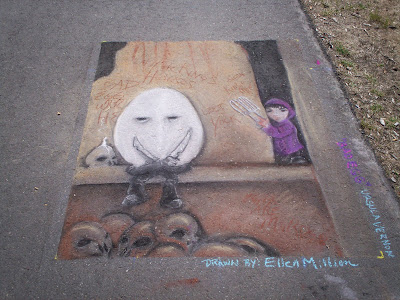 Then there's the drawing by Jennie Seay called 'Golden Lizard' 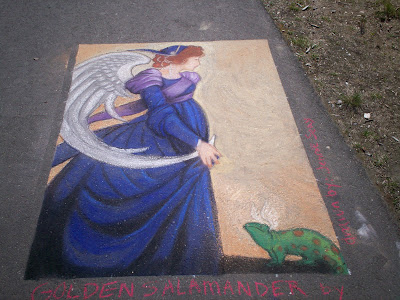 Then there's this one that I did as a homage to Brandon. Rosetti's Persphone was the last street painting he did
when we chalked together. 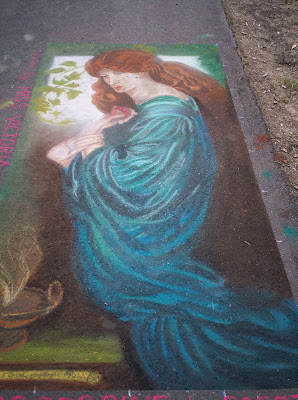 It rained on & off again that day but we still continued on. We had a few vistors walk by while we chalked. One of the locals told me "That's so pretty I could fart." That's the first time my art has ever received a compliment like that.
Posted by Miss Victoria Regina at 3:23 PM
Email ThisBlogThis!Share to TwitterShare to FacebookShare to Pinterest
Newer Post Older Post Home