I've been a bad, bad blogger. Its been forever since I last posted but yet I keep going to exciting events & taking photos. One example is the Midnight Sun Festival here in Fairbanks. Never have I live somewhere that the summer solstice is sooo important. Just walking down the street people greet you with a 'happy solstice!' It was even printed on my grocery receipt.
I wasn't in Fairbanks last summer so I didn't get to experience the offical 24 hours of sunlight. So this year I decided to make the whole of it and do a street painting with the girls. Since this was our offical first street painting as a group, we decided on the name of Midnight Madonnarie....okay, that's a bit of a lie because 'we' didn't decide on it. I was there with the event organizer, and she asked for a name for publication & we hadn't thought of ourselves as a group just some artists, so that name is what popped out.
Starting out that morning, one artist after another came up to where we were working asking us what we were selling. We would say nothing but they would looked stumped and ask another question because they must of posed the last question wrong. So they would ask us if we were selling prints of the finish work, or asking money for photos taken, or my favorite (since its ALWAYS asked) the town was paying us to draw on the ground and they are going to seal it afterwards. Nope, left them shaking their heads saying they'd have to come back later to see whate we were actually do.
This time I thought I would ask my coworkers to pick out the piece that I was going to be doing. I will never do that again. They picked John Singer Sargent's Lily, Lily, Carnation, Rose. 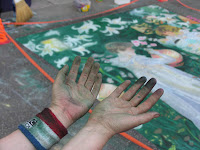 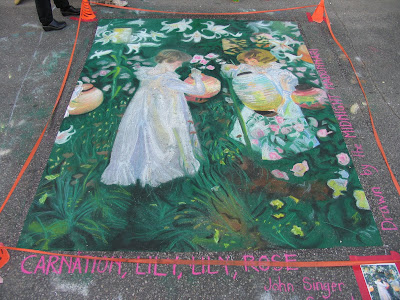 Jenni and Ellen did their own piece: 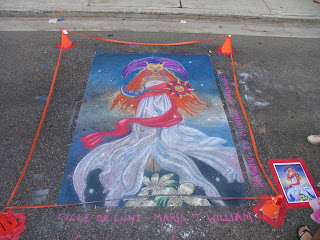 They have improved so much & its only their second painting!

Note: These photos were taken at 10:30pm at night.