No Sleep Til Brooklyn!!

It's 1:35pm on a Saturday. Sitting at my desk at the office making up hours for all the vacation I'm taking this month. Later on this month my sister is coming up to visit, but two days ago I came back from 8 great days in New York City.
My friend William was back there for the summer. For the past half decade he had been talking about me coming out to visit while he was there. These seemed to be the perfect time to go- right before he was going to head back to Denver for the fall semester.
I will be the first to admit that it had an air of a doomed vacation. With the humidity and heat at the highest in August & the folks at Alaska Airlines saying they couldn't find a flight with less than 21 hours travel time. It did work out fine & I had a fabulous time with William in the city. 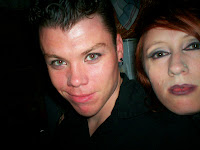 The first day was spent at William's place on the beach at Coney Island with him repeatedly reminding me to stop saying hello to everyone. It took me awhile, but eventually I was allowed to go out to ride on the Wonder Wheel. That part of the boardwalk is remaining but AstroLand will be torn down this following year. I'm happy to say that the freak show will stay! 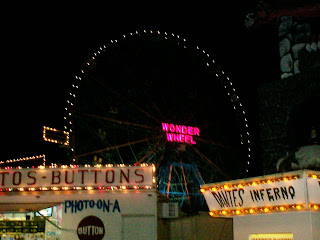 The first day I got a phonecall from my puppy sitter back in Alaska that Itchy had an accident! Apparently Itchy was running mach 4 chasing the sitters two big dogs and crashed head first into one knocking out a tooth.
The next day I had to sleep in because I slept terribly...it was too dark:) But eventually we hit the MTA and went to the Village for my dance class. I was tired but I think that I did quite well for my first breakdancing class. We ate baklava in Thompson Square then in the evening we went out dancing at the Pyramid. High heels and cobble stone suck! 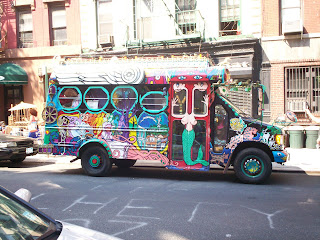 Friday I had to go to the free day at the MOMA. What a great building...and the art was fabulous. Richard Serra was in the main gallery. I've never been impressed with his work but how many artist can say that their art has killed someone? I got to see my favorite Rosseu, Belmer & Duchamp pieces that day. To top off the day I got to eat Indian food....that wasn't out of a can! We took a walk through Central Park at dusk while the fire flies were starting their show. I've never seen a fire fly in person before so William caught one for me:) We came out at Columbus Square. 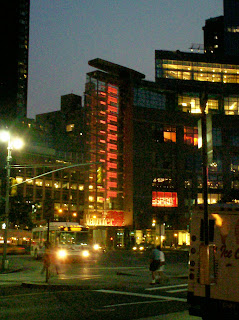 I generally dislike Italian food, so William wanted to challenge this so we went to plenty of Italian restaurants. In Little Italy we went to Lombardi's for THE BEST PIZZA EVER! Anyone who truely knows me that this is as rare to hear coming from my mouth as an apology from the Vatican. I will continue to say that pizza is just Italian leftovers....except there. 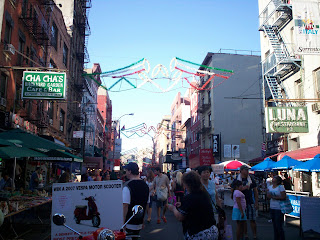 William's mum took on a drive down to the Brooklyn Heights and then over to Williamsburg to walk on the promenade & get up close with the Brooklyn Bridge....and pizza at Patsy's. 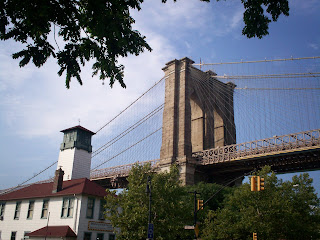 I really enjoyed Chinatown. We came up from the subway at a park that had a traditional Chinese band playing with a bunch of older gentelmen playing some game that looked like checkers using MahJong pieces. We then ventured to a 5 story art store that I kept on thinking William was calling Propane...but it was just his accent & it was actually Pearl Paint. I went through almost every store in Chinatown looking for the Nana movies. William had to convince me not to buy every striveled root/sea creature that I could place my hands one. They looked so great! Instead he took me to a Kung Fu shop so I could finally by the veiled fans that I've been wanting for so long. Ofcourse we ate at a great restaurant though I wanted to try all of these speciality shops. A whole restaurant for egg custards? 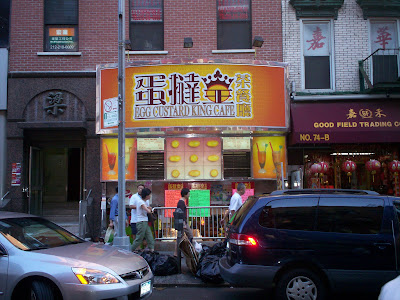 William & I decided then that we were going to both try to learn Japanese so we can go on this 'Ninja Vacation in Japan' I saw advertised. You think I'm joking? Back at the apartment, we got online to check out a website that you can download a 2 person RPG game called Romaji Quest that teaches you Japanese.

I did alot of dancing on my trip. I went to another class put on by the Bellyqueens to learn none other than Bellydancing breakdancing. Did I mention that I'm typing right now with a brace on my left wrist? Other than that we went to the Village again to a night called Salvation that didn't end until 4:30am. We returned back to Coney Island just in time to have sweet milk coffee and pastries up in a lifeguard chair while watching the sunrise over the Atlantic.

By far the best part of the trip (besides seeing William) was seeing Diamanda Galas in concert in the meat district in Chelsea. I've been wanting to see her in concert since I got my first album of hers for $60 back in 1995. She just never comes further West than NYC. I was a breath taking performance at the Highline Ballroom. William got the tickets.....major points go to him. Afterwards we walked past a marching band playing trashcans on our way to the WTC site. 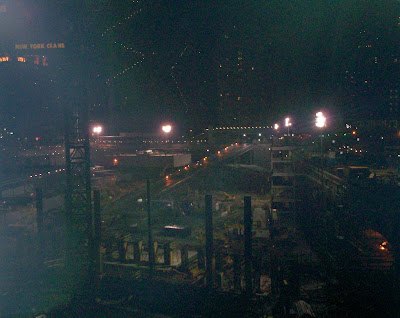 A lot of these photos are of the night because it was bloody hot! We stayed in most of the mornings & then venture out for dinner. The most enjoyable place was a little Japanese restaurant in the Village. We had walked past it with its sign all lit up in Japanese with a cartoon head with a scarf over his head like a vintage Japanese theif & his lips doing an 'arooga' then a crazy bear sculputer next to the door. When we got our menus I looked at the specials & I couldn't understand why no one else around us was talking about it. They had some drawings of it of asian bondage & and a man putting a revolver up one woman's ass. The menu was in Japanese with english underneath. The descriptions left one to wonder...William said we were no longer friends if I order the 'Bull Penis.' Instead I got some Ume Onigiri, Yaki Soba, Red Bean Mochi & Kirin beer. When our meals came out William just stared at mine & said, 'Victoria-what did you order? Your food is moving." I looked down & he was right it was moving! The fish flakes on top were waving around like an octopus & I mentally went over the menu...nope, no live creatures in bbq noodles. Then I remembered my laws of thermodynamics, the heat of the noodles were making the paper thin fish flakes move. What fun! Then there were panchito machines near the bathrooms....which I had to wait out front of to see which one was the female bathroom.div> 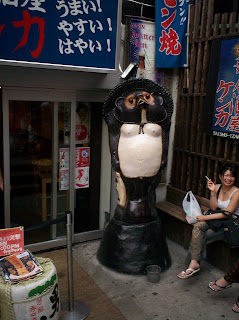 The last day that I was there a tornado struck Bay Ridge that shut down the lines into Manhattan. Otherwise I would of gone to the Guggenheim & seen more of Central Park. Instead I got on that darn bicycle & rode around with William. I had a great time in NYC. After opening up my suitcases I'm amazed on what little I bought. I didn't even return with a single scooter part?! It must of been a vacation after all.
Miss you more than moving meals.
Posted by Miss Victoria Regina at 3:35 PM
Email ThisBlogThis!Share to TwitterShare to FacebookShare to Pinterest
Newer Post Older Post Home